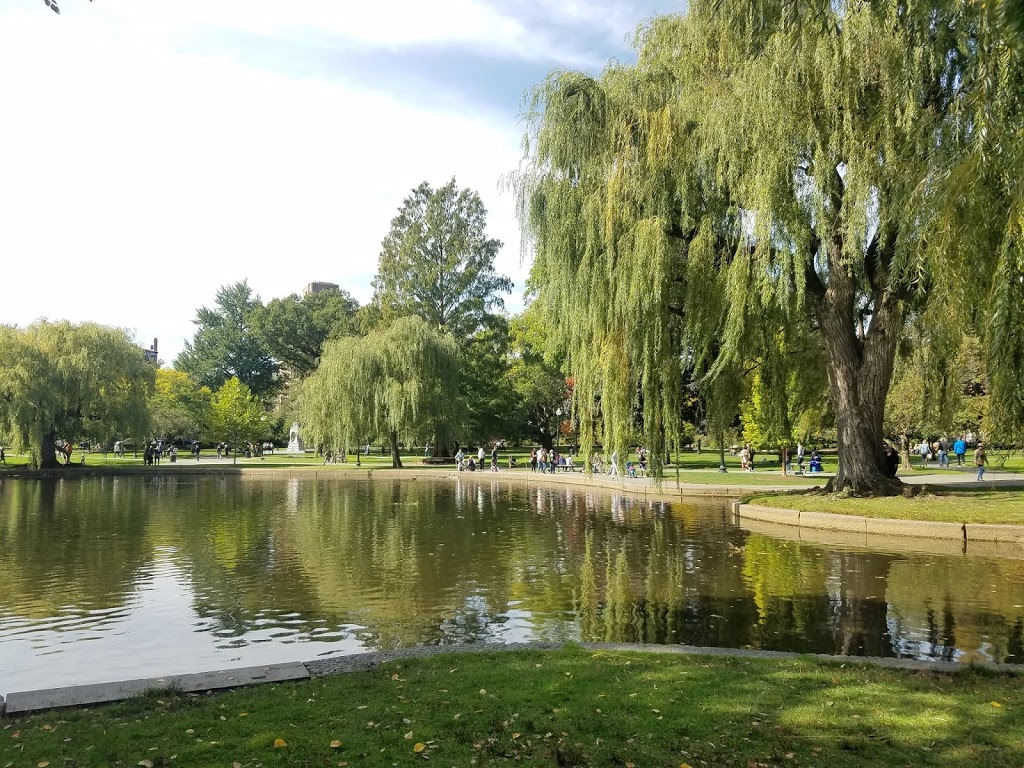 The next day I headed to Boston with a ticket for Old Town Trolley Tours. I started off in Boston Common and Public Garden, Boston’s largest park, founded in 1634. The park is 50 acres and was so pretty!
From there I walked to the corner of the park and crossed the street to arrive at the Cheers bar. Only the exterior of the bar was used for the TV show, but they’ve made a set replica bar upstairs above the.. well.. already existing bar for tourists’ sake. I never watched the show so I just walked through quickly then went back outside to wait for the trolley.

I’d debated whether I wanted to get a trolley ticket or not and decided to do it because I’d walked so much in Salem and didn’t want my feet to start hurting… plus the sites in Boston looked a lot more spread out. With my ticket, I could hop on and off all day which was nice. I rode around until I arrived at Copley Square. One side of the square had the beautiful Trinity Church, the other had the Boston Public Library.

The library opened a couple of minutes after I arrived so I went in. It was beautiful! I was so glad I got to go in. Bates Hall was on my list, a huge reading room that reminded me a little bit of Harry Potter and the libraries you see in the movies, with the green lamps on all the tables. So pretty!

There was another area of the library where the ceiling was covered in paintings.. amazing! It reminded me of the US capitol’s friezes.

The final area of the library I visited was its courtyard. Yet another beautiful area! 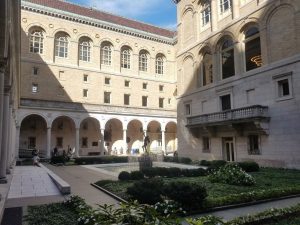 Once I was done looking around the area, I headed back to the trolley and it took me back past the Cheers stop, headed in the opposite direction past the Massachusetts capitol.

When we arrived in the Seaport District, I got off again and walked halfway back over the bridge to look at the Boston Tea Party replica ships, museum and gift shop. On my way over I saw a small boat (seen at the far right of the pic below) with a bunch of teenagers or preteens on it. One of them was in a swimsuit, climbed onto the top of the boat, then dove into the water! He did it several times. While it wasn’t cold, it wasn’t exactly warm and I imagine the water had to be pretty uncomfortable. His friends were filming him.. guess that was his motivation to freeze! 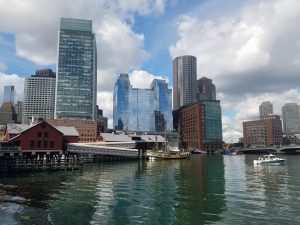 Anyway, I walked around the gift shop and tea room for a bit and watched some tourists throwing big replica bundles of tea over the edge of the ship, then headed back to catch the trolley again. This time we drove by Chinatown and the driver said Boston has the third-largest Chinatown in the country, behind New York City (largest) and San Francisco.

Unfortunately, there was a Columbus Day parade going on so all the main stops around the Freedom Trail were closed and the bus route was a bit hard to keep track of because it was going to the remaining stops out of order. There was one street I thought was interesting, where the driver said neon signs aren’t allowed, and that hundreds of years ago the shops would place a picture of what they sold outside to help those who couldn’t read. One of the places we passed as a chiropractor who had a model spine at the edge of their sign! I was able to catch a picture of the one below, Helen’s Leather Shop, with a boot hanging outside.

The next time I got off of the bus, it was so I could walk to Faneuil Hall (1742) and Quincy Market (1826). Faneuil Hall had a LONG hallway that ran the length of the building and was lined with food vendors. There was even one with clam chowder samples which was nice!

After wandering around the area for a bit, I hopped back on the bus to ride it all the way around and make sure I heard the full tour. Or at least as much of the tour as they were doing. About an hour later around 5 pm I arrived back and found the Freedom Trail to finish up my tour of Boston as it was getting dark. Freedom Trail was another trail that was marked by a red path–love it! Again, it made it easy to navigate. It led me to the Old State House (1713) which was the seat of the Massachusetts General Court for some time and is one of the oldest public buildings in the US.

The last site I saw along my walk was the Granary Burying Ground (1660). The cemetery is pretty close to Boston Common and has roughly 2,300 markers, though 5,000 are estimated to be buried there. 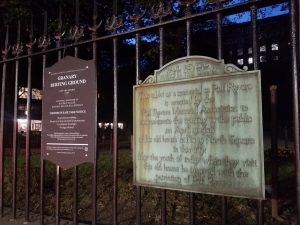 After that I arrived back at Boston Common, was done for the night and made my way back to my hotel.