Yesterday morning we followed our regular routine of getting up at 7:45 am (8:15 pm CST) to get ready, pack our bags, eat breakfast and check out of the hotel (Desert Tulip.. beautiful place). Each morning we have to say “no” repeatedly to the bell hop at each hotel so we can take care of our own bags (I’m worried about running out of cash).. but yesterday really was crazy! When we stepped into the courtyard pictured below, a man literally ran across it to take our bags. We were too tired to argue, so we let him take them, but then he passed the lobby, went to the other corner of the building, down a hall, outside to the patio, back to the front door where he left our luggage outside. We were so confused by his route (doubled instead of going through the lobby to the front), and didn’t want our bags left outside unattended, so we took them back and went to breakfast. As soon as we finished breakfast, the man who had taken our bags to our room the day before magically appeared. No joke, we stood up and he appeared. We politely declined his help and when we walked into the lobby, another man tried to help take our bags. Then another after that. And again after that. It definitely set the record!

Our first stop of the day was at the Jaisalmer Desert Festival in the Sam Sand Dunes Gajraj dropped us off at a military barricade down the street from the festival and we walked with our guide into the field. When we arrived, they were having a camel decorating contest. As usual, I took far too many pictures. It made me wonder how much weight camels can carry.. they were SO decorated! The military seemed to be helping run the festival so there were uniformed men and women all over the place.

After the camel decorating contest, there was a race. The race had several men took off everything but their briefs and then raced to put on traditional pants, a belt, a shirt, a turban, a saddle blanket, saddle their camel, then ride across the finish line! They also were recruiting women to sign up for a tug-of-war match with foreign vs. Indian women.

While watching the games from the foreigners’ section of the stands (literally, there was a section labeled “foreigners”), our guide explained to us that different colored turbans represent different religions and different castes.  He said white turbans are worn by Muslim men, while the colored turbans are worn by Hindus. On the topic of camels, he told us they cost $1,000-5,000, depending on their health. We had to leave after about an hour so we could tour the city, but were so glad to get to go to a festival.

After a short drive back into the city, we began our tour. During the drive, I asked our tour guide about eyeglasses we kept seeing painted on walls and street dividers. He explained that it had to do with an initiative Gandhi had been instrumental in, to have a cleaner India, Swachh Bharat Mission.

On the way to our first sight, our guide stopped to point out a wall that was painted with Lord Ganesha. Three to seven days before a wedding, the bride and groom’s families will paint an invitation on a wall outside of their homes. If it’s the girl’s home, her name is first. If it’s the groom’s, his goes first. The painting always includes Lord Ganesha, the date of the wedding, and sometimes one-liners. The sign remains on the house until there’s a new wedding and then it’s painted over with a new invitation. From there we continued to Gadisar Lake and saw a couple of men feeding HUGE catfish in the water. Unfortunately, it wasn’t a good time of the day for pictures!

We continued our walk to the Jaisalmer Fort, the only fort we’ve seen so far with people still living inside. Because of the people living inside and using water, the fort is sinking each year, and our guide asked us not to purchase anything inside, saying that if tourists stop buying, they will have to leave and the fort can be saved. They were doing construction on the outside to try to rebuild the wall of Earth that the fort sits on. On the inside there were tons of vendors.

Immediately after entering, our guide showed us saffron handprints by a doorway just inside the fort. He explained that if fort was under siege, the women had a ritual to kill themselves to protect their honor instead of being taken by the enemy. They would leave saffron handprints on the wall and then jump into a fire.

Inside of the fort, we were able to visit two Jain temples that were next door to each other. We had to leave our water and shoes outside of the temple to enter. The detail in each temple was incredible. There are seven in total but we just visited two.

After sightseeing for a bit, we went outside of the fort to a store where the shopkeeper does silver filigree work, where I dug through a couple of piles of bracelets and charms. After looking at probably hundreds of times, I bought the first bracelet I’d touched, one that’s similar to one I purchased in Paris years ago. The price was way better though!

I loved getting to walk through the narrow streets of the fort and it’s surrounding area. We got to see up close the people, houses and then dogs, cattle, pigs and goats just roaming around. It was nice to finally take pictures of them up close, without shooting through the car window or worrying (least not as much) about getting hit by a moped or auto rickshaw. One thing I don’t think I’ve gotten a picture of yet is what we very frequently see cattle and other animals eating.. trash. 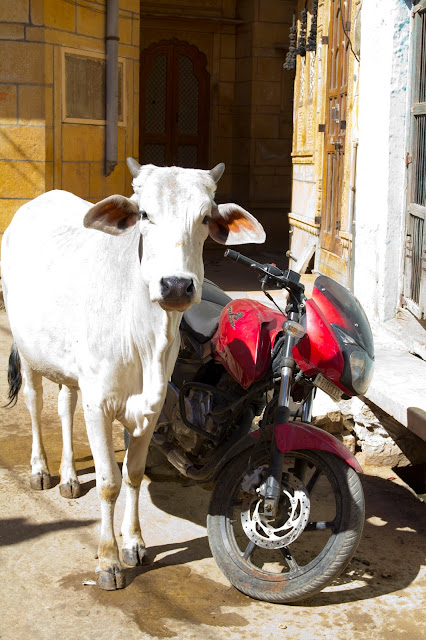 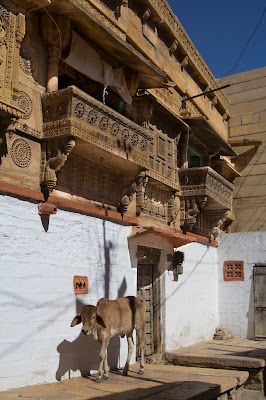 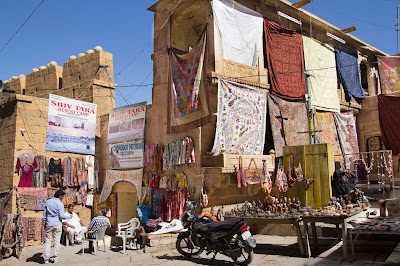 When we finished touring Jaisalmer with our guide (who loved to make super cheesy jokes and was very vain and supposedly in Bollywood movies..), we headed out to the desert to sleep in a tent. Hajar and I both had been picturing riding a camel out a ways into the desert and sleeping in a tent without power, only fire to light the night or keep us warm, as that was the only visual we had, which we’d gotten from Morocco. It was not the case. I recently learned the word “glamping” and wondered what it truly meant.. now I know. We were basically in a hotel room that happened to have walls and a ceiling that were formed by tent canvas! Haha.. probably for the best. I was afraid I was going to freeze to death in India, forty miles from the Pakistan border. Here’s a video tour of our room:

After getting settled, we had some tea, cookies, and French fries (??), then headed out the gates of the Desert Springs Resort, over to the camels. This time we sat two to a camel, with me in the front with my camera. I had been dreading experiencing the camel standing up and sitting down for days, but it ended up ont being as bad as I remembered. We rode for maybe ten minutes into the brushy (at least on the outskirts) Thar desert. 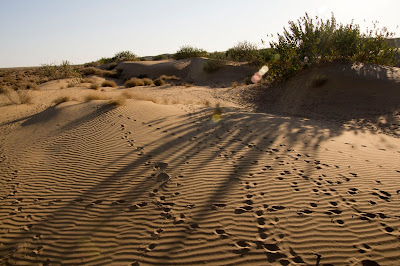 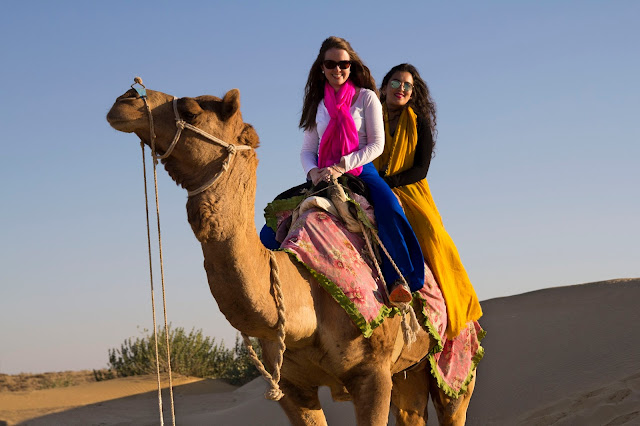 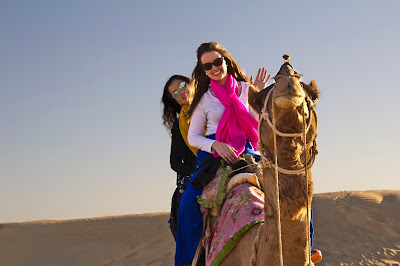 While we were sitting, a group of several women and a men was making their rounds to the tourists, singing and dancing to the same song over and over before pushing tourists for money. When they headed our way, we walked in the opposite direction until they stopped following, and sat back down to wait for the sunset. A few minutes later, a new group of three women and a child walked up and asked Hajar for her lipstick, then repeatedly for lipstick of money until giving up and going to the next closest group and starting the same song the other group was performing.
Before the sunset, a beetle crawled up to us! Quite creepy as all I could think of were the beetles in The Mummy that would crawl under the characters’ skin and kill them…. but it was fascinating to see its tracks in the sand.  I ended up following its meandering trail around the dunes for maybe fifty feet before the trail was lost to the wind. I think hajar thought I’d lost it.

After the sun had set, we got back on our camel to ride back to the tent. Back at camp, I pulled out my tripod to take a few pictures of our tent and the camp.

That night during dinner, everyone was entertained by Queen Harish (a past finalist on India’s Got Talent), musicians and dancers. We couldn’t understand the majority of the speaking portions as they were in Hindi, but the other parts were really amazing. At the end of a long, several-hour program, Queen Harish pulled Hajar and me, the only foreigners at this point, up onto the stage with her to dance.

After the program, we talked with Queen Harish a bit. Amazingly, Queen Harish studied belly dancing in the US and has been to the East and West coasts.

In other news, I took over 500 pictures today.. my camera needs a break! And I think I’m averaging three hours (writing+deleting/choosing/editing pics) per blog post.

9th Feb: Day 07: Jaisalmer
After breakfast leave for the city tour of Jaisalmer. Visit the famous Havelis (mansions) known for their frescoes. Jaisalmer’s strategic position on the camel terrain route bought it great wealth. The merchants grew prosperous and commissioned great havelis, or mansions, to flaunt their ever-growing status in society. Made of local golden-yellow sand stone and wood, some of the havelis are still in excellent condition. The most elaborate and magnificent of all the Jaisalmer havelis is the Patwaon Ki Haveli. Five Jain brothers built the Haveli between 1800 and 1860. Salim Singh Ki Haveli and Nathmal Ki Haveli are the other two havelis that are opened to visitors.
Built in 1156 by the Bhatti ruler, Jaisal, THE FORT here stands atop the 80 m high Trikuta hill. 3 walls and features 99 bastions surround the fort. Over the centuries, the golden sand stone fortress witnessed many battles between the Bhatti Rajput’s, the Mughals and the Rathore’s of Jodhpur. Within the fort complex lie the beautifully carved Jain Temples built between the 12th and 15th centuries. The Maharawals (rulers) of Jaisalmer were devout Hindus but were tolerant of Jainism, and encouraged art and religion. There are 7 temples in the complex – Chandraprabhu, Parasnath, Shitalnath, Sambhavnath, Shantinath, Kunthunath and Rikhabdev Temple.
The temples are all connected by a series of corridors and walkways. Close by is the Gyan Bhandar, a library founded in 1500 A.D. This house is priceless ancient manuscripts and other exhibits like astrological charts, besides the Jain equivalent of the Christian Shroud of Turin.
In the evening, proceed for the excursion to Sam Sand dunes. Located at a distance of 42 kilometers from Jaisalmer, Sam Sand Dunes is the closest point to witness the total sandy desert. You can also see the patterns and motifs created by the shifting sands and air. Moreover, Sam Sand Dunes also provide you with an unforgettable experience of camel rides and the sunset.
Check in to Spring Desert Camp.
Overnight at Tent