Today on the road to Udaipur, Gajaraj stopped at a textile factory so we could see the workers making clothing and home goods. They took us into a big room where there were women sitting on the floor hand embroidering fabric, and men were working with cutting and sewing machines. After seeing the factory area, they took us into one of the rooms we’ve been in many times on this trip, where we sat along the wall and they unfolded tens of pieces in front of us while giving their sales pitch. We didn’t purchase anything but enjoyed seeing the factory.

The next stop along the road was at Om Banna, a temple dedicated to a man and his motorbike. In 1991, the man was in a wreck and died and police took his motorbike. The next morning, the motorbike was back at the scene of the crash. They took it back to the police headquarters, emptied the gasoline, and chained it up but again, the next morning it was back at the scene of the crash. The locals ended up building a temple and encasing the bike in glass, and people stop there to pray for a safe journey on the road.

A symbol we noticed early on and have seen daily since is the swastika. Originally the swastika was used as a sign of well-being. It can be seen carved into architecture and painted in many places that we’ve visited. There’s even one on our car. Here’s a really interesting BBC article on how it morphed into what we think of today.

Our next stop was at Ranakpur Temple, a beautiful 14th-century Jain temple along our drive to Udaipur. We had to rent a locker for our phones and water bottles, get tickets, audio guides (signs said  “required for foreigners,” and a photography permit, and leave our shoes outside before we began the tour inside. While following the audio tour, we learned the seven tenets of the Jain religion, ahimsa (non-violence), satya (truth), achaurya (non-stealing), brahmacharya (celibacy/chastity), and aparigraha (non-attachment/non-possession). The temple covers about one acre of land. 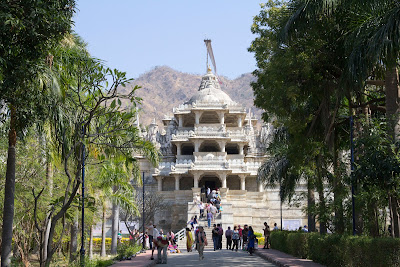 As we continued our journey to Udaipur, we followed winding roads through the hills and saw lots of monkeys along the way. At one point Gajraj stopped the car and held chips up to the window and one of the monkeys jumped onto the hood! Another jumped on the top of the car and then hung down in front of Hajar’s window. They were definitely more aggressive than the ones we saw in Morocco!

After checking into our hotel in Udaipur, Gajraj dropped us off in town and we walked about ten minutes to a restaurant called Hari Garh. We went upstairs to their rooftop patio and sat crossleged on cushions at a short table overlooking the water. I had Murg Muglai (it seems “murg” means chicken) and garlic naan. It was really good. Dinner at Rajdhani, my sizzler at Gypsy and this have been the three things I would be happy to eat again so far.

After the sunset, there were pretty big bats crawling ALL OVER the tree next to the patio. Very creepy! After paying for our food, we quickly walked back to meet Gajraj and go back to the hotel.

Tonight we learned that if we use the shower, it floods the whole restroom. No clue what’s up with that! There’s a glass wall that divides the shower from the rest of the room, yet water can just go underneath. Weird. This is also the loudest of the hotels so far.. all have been pretty loud but this one wins! Thank goodness for earplugs.

After breakfast drive to Udaipur; arrive Udaipur and transfer to Hotel Mewargarh.

Set on the shores of Lake Pichola and surrounded by hills, Udaipur grew in complete contrast to the harsh deserts of the rest of Rajasthan. As capital of the old Mewar State it was the only Rajput stronghold to uphold its Hindu allegiance in the face of Muslim invasion. This fairy – tale city, with its marble palaces and lakes surrounded by a ring of hills, was founded by Maharana Udai Singh in 1559. The city is dominated by massive City Palace, which overlooks Lake Pichola with its romantic island palaces. Picturesque havelis, ghats and temples line the lake front, with the lively bazaars of the old walled city stretching behind them.