Today we started off with a new driver and our guide for Udaipur by going to the City Palace and museum. Our guide taught us that Maharana means king in Udaipur, maharajah means king of big kingdom, and raja means king of small kingdom. Also, he told us “pur,” on the end of so many of the cities we’ve visited, means “place.” We also learned that one of the James Bond films, Octopussy, is set in Udaipur.
While walking up to City Palace, we had a pretty view of Lake Pichula and several palaces including summer and monsoon palace. When we got to City Palace, our guide pointed out a fountain and told us that the fountain is on when the king is home, off when he is away. The palace had several beautiful rooms, covered in mirrors, and a courtyard that had four different, amazing peacock mosaics. We also saw a scale the king used to use.. quite a different execution than our modern scales. 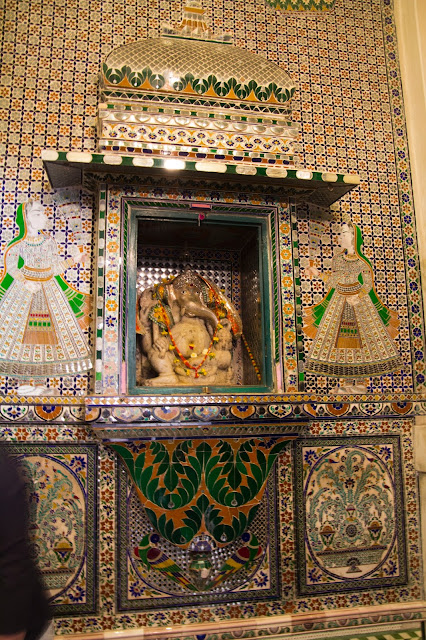 My favorite items in the museum included a carriage and harness and some pretty different shoes!

After touring the palace and museum, we had a thirty-minute break in the courtyard to explore, take pictures, or visit the stores. Hajar went to grab a cup of tea while I explored the stores. I finally got to venture into one of the bangle stores I’d been dying to see.. so many bracelets! I’m hoping to get to go into more in the next cities.

Once we were finished, we visited a Hindu temple for a few minutes, then headed back down to our driver and were taken to the Sahelion Ki Bari gardens. These gardens have several different fountains that are naturally powered by the lake’s height in relation to the park, instead of by electricity.
After an afternoon break at the hotel, we went for a boat ride on Lake Pichula, the largest lake in Udaipur. We had to wear life vests, which were HUGE and (kind of) had Velcro in the front. We went by City Palace and then looped back and de-boarded at Jagmandir Ghat so we could explore the small island for a few minutes. After walking around for about ten minutes, Hajar got chai masala tea and I got two scoops of reeeallly good chocolate ice cream and we sat for a while enjoying the beautiful view of the water and mainland of Udaipur before we got back on the boat.
It was great timing to head out on the boat at 5 pm like we did; just before we met our driver, we had a gorgeous view of the sunset over the water.
The beautiful sunset was followed by five VERY happy minutes for me… while we were waiting for our driver, suddenly monkeys started appearing! Lots of monkeys. I was thrilled as I didn’t get my monkey fix from our short experience in the car. Hajar crossed the street to get away from them but I got closer to snap pictures. One of the times I lifted my camera to my face, I guess the lens reflected and startled the monkey that was three or four feet away from me above my head.  He leaned in and made an angry almost hiss noise and showed his teeth… I leaned back and was worried. Thankfully that was all that came of it. Just as our driver pulled up, a monkey was sitting close by with her baby hanging onto her. SO CUTE! I didn’t want to leave.
Since our dinner was so good, we returned to Hari Garh. The night before, Gajraj had dropped us off about ten minutes away, and we walked down a street, across a pedestrian bridge, and down a few more streets to find the restaurant. This time, our new driver was really sweet, misunderstood Hajar when she told him he could drop us off where Gajraj had, and he drove us all the way to the restaurants. If the streets had been any more narrow, he would have had to fold his mirrors in.. it was crazy. Especially since cars try to go both ways down the road. If you meet another car, you have to back up! This time I had Murgh Lababdar (pre-marinated boneless chicken pieces baked in a day oven and cooked with thick tomato gravy) and cheese naan and about died it was so good. OH my gosh. Possibly my favorite meal ever. It was such a good place food-wise and was fun to sit on cushions, overlooking the water. This time I got a much better shot of one of the creepy bats hanging from a tree maybe ten feet from us.
After dinner we walked around to the few stores we could find that were open, including one where the store keeper talked our ears off about the places he does business and how it’s wrong to have a guide or driver in India and allll this stuff (whatever, man!). We were finally able to leave, telling him we had to meet our driver. Our driver decided to not drive back to get us and had parked close by and walked, so we walked back to the car with him. After trying to move an auto rickshaw that was blocking the car, he very carefully got out of the spot, only to get stuck on the bridge back to the hotel. The bridge was two-way, but cars had parked all along one of the sides, making it one way. So we had to back up to allow other cars to go so the path was clear for us to go!
When we got back to the hotel, I made what I have titled a “reverse moat.” Instead of being a little ditch holding water, It’s a wall that holds water, to prevent our bathroom from flooding. This hotel is the worst! The absolute loudest, coldest, you have to wear shoes in the room or your feet will get dirty, and then the shower floods the bathroom. Boo!
Something else I’ve been meaning to talk about but haven’t yet is the bathrooms. I think I’ve yet to see a bathroom that doesn’t have a little handheld sprayer and drain next to the toilet. I guess it’s their version of a bidet, and explains why some of the restrooms along the road won’t have toilet paper.
———————————————————–
12th Feb: Day 10: Udaipur
After breakfast proceed for half day city tour of Udaipur – visiting the City Palace and Museum. The largest palace complex in India, it is a blend of Mughal and Rajput influences. Also see the 17th century Jagdish temple, drive around the Fatehsagar Lake, and visit the Sahelion ki Bari (the Garden for the Maids of Honour), an ornamental pleasure garden with fountains and marble kiosks. Later visit the Bharatiya Lok Kala Mandir or the Folk Art Museum.
Later in the evening take a boat ride on the 4 km long and 3 km wide Lake Pichola, which is fringed with hills, palaces, havelis, ghats, embankments and temples and offers spectacular views of the city. Visit the Jag Mandir Island with its exquisite Gul Mahal Pavilion.
Overnight at Hotel