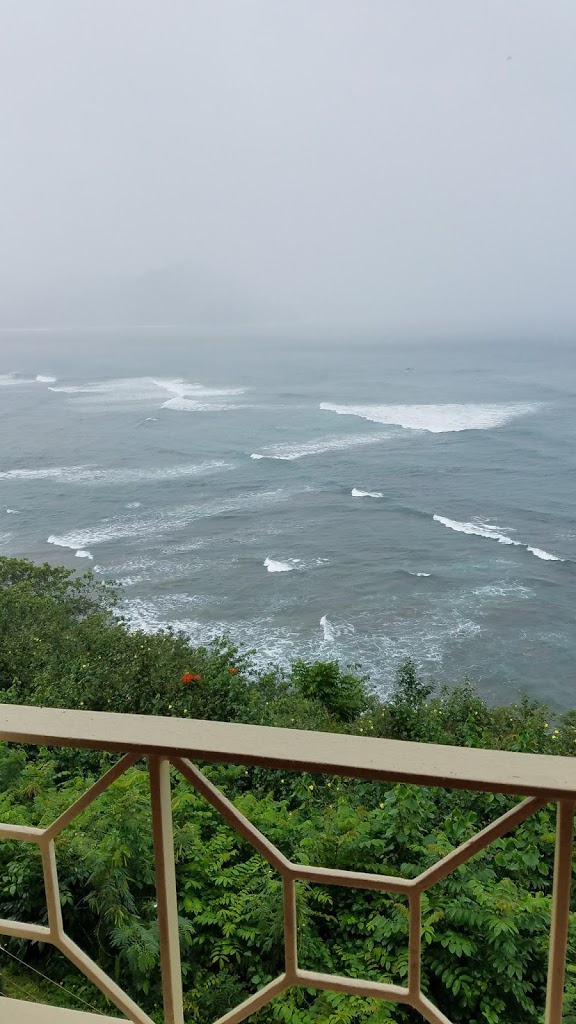 Today was a rainy day. We drove to Amini beach just a little south of the hotel because we had been told it was a great place to snorkel. We parked at one spot and walked out to the beach, then walked down farther to where there were more people, but didn’t really see many people out in the water, and no one snorkling. I think Martin looked on his phone and decided we hadn’t quite made it to Amini, so we got back in the car and drove a little more, parked again, walked down another beach, and set down all our stuff and got ready to get in the water. Martin went out and I watched, contemplating going in, but cold even having the water on my feet.

When he came back after a couple of minutes, he said the visibility wasn’t good at all, so we decided to leave. From there we started to drive to the end of the road at the north end of the island. Right before we got there, we stopped again at Ha’ena beach because I saw a coconut stand and had really wanted to try one. The girl at the stand asked if we were wanting to drink the coconut, eat it, or both, we said both. She cut it open and put a straw in, and told us to drink it and then bring it back when it was empty and she would cut it open. We walked over to the beach while we sipped on the coconut. 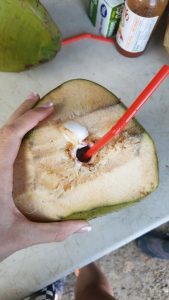 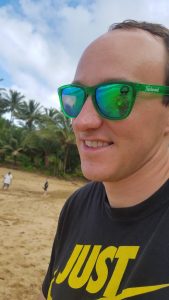 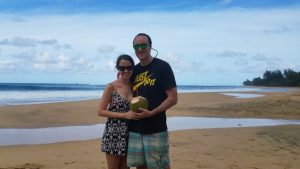 When we were done drinking from the coconut, we took it back and as promised, she cut it open, and then scooped out the flesh inside. There was some hot sauce sitting on the table that she said was very good on it, so we tried a bite with it, and she put the rest of the coconut into a bag for us to take on the road.

We continued down the road a few more minutes until it came to a dead end at Ke’e Beach and Hanakapiai Trail. Martin wanted to hike the trail so we could see the Napali Coast. It was really muddy from the rain so I was wearing my water shoes for the trail which wasn’t great since the soles were very thin… I could feel every rock or branch I stepped on. There were some pretty views though. We made it somewhere between one and two miles down the trail. It was pretty slow going with the mud and grip-free shoes! 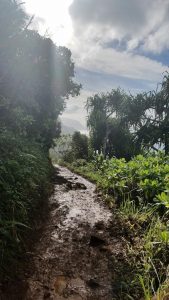 Martin made it back to the entrance of the trail and Ke’e Beach before me so he went out in the water for a bit. Once I got back to the same area, I checked out the beach and saw a wedding happening, then we headed to the car.

When we got back to the hotel, we went down to the beach/pool area for a bit, then cleaned up, and went down to the hotel bar to make leis. They gave us a bunch of orchid blossoms, a needle and string to work with, and first had us pinch off the stems of all the flowers. Once were done with that, we could either string them from the side or through the center of the flower. I ran the string through the center of almost all the flowers, and Martin did it through the side of his. His lei turned out way prettier than mine! Once we were done, the lady who was helping us (who also taught us to play the ukulele earlier in the week) tied up the ends and had us put the leis around each other’s necks. After that, we headed to dinner at Bouchon’s, a place the other couple we went snorkeling with had recommended.