What a blessed Sunday and good weekend!
Sunday morning I left the apartment and went for a walk without a map or any destination in mind.  I ended up walking right to a building designed by Gaudy that I had seen on lots of postcards.  Cool!  I liked seeing his work around Barcelona, it had a beachy feeling to it and was designed to mimic aspects of nature.  After that I kept walking and happened across another one of his buildings, and then I took the metro to the port to look around there a little more.
After lunch with Clay and his roommate Eddie, I headed back out to the Arc de Triomf, Barcelona version, then went through the Parc de la Ciutadella and happened across this fantastic fountain that I had seen in pictures!  I was thrilled; I had wanted to go see the fountain but couldn’t ever find out where it was.  I was so happy to stumble across it!  I think it might be my favorite thing I’ve seen.
From there it was on to the beach.  The sand at the beach felt so course compared to the beaches in Texas, and it was pretty steep right before the water.
Once I was done at the beach, I meant to go to the Olympic complex that was built when Barcelona held the 1992 Summer Olympics.  I thought I saw the buildings, but now that I’m Googling it, it looks like I didn’t!  Darn it.  Turns out I saw buildings by the Plaça d’Espanya that were constructed for the 1929 Universal Exposition (World’s Fair) and an old bullfighting ring.  It’s amazing to me how many of these buildings in Europe were built for special events like the World’s Fair or Olympics.  Amazing stuff.  One of the World’s Fair buildings, Palau Nacional, was renovated for the 1992 Olympics.  It now houses the Museu Nacional d’Art de Catalunya.  Hah!  I thought I had at least seen the structure that held the Olympic flame in the distance, but now I’m seeing that it was actually Montjuïc Communications Tower, built to represent an athlete holding the flame while broadcasting the Olympics.  Ugh.  Oh well.  I saw what I could with the time I had! 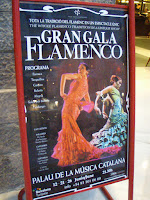 I had to hurry away from what I thought was the Olympic complex to get home to change to see Gran Gala Flamenco with Clay and one of his roommates at the Palau de la Musica Catalana.  The flamenco dancing and costumes were fantastic; the dancing reminded me a little of tap dancing.
On Monday, I just wandered around the town to kill the time before I needed to head out for my flight.  I had wanted to go up to Montjuic, a village in the hills, but I didn’t have enough time.
Oh gosh.  I flew home with Ryanair airlines and had quite the time with them.  They are a discount airline unless you book a few days before as I did, in which case you pay just as much as you normally would but get bad service.  I had been VERY careful when booking to make sure I didn’t get caught in any of their tricks to make more money (if you don’t print your boarding pass at home, it will cost you 50 EUROS so about 70 US DOLLARS for them to print it!).  I even looked at my laptop suitcase online and plugged every dimension into a converter to make sure it was within the (centimeter) dimensions they allowed!  Well, I had trouble anyway.
You know those little boxes you see at all the airlines that say your luggage must fit inside, but no one in the history of mankind has ever actually put their luggage inside or thought of doing such a crazy thing because no luggage is actually that small?  Yeah.  Well Ryanair breaks all those unspoken rules of the airport and actually makes you put your bag in the tiny box like some circus act!  And if it doesn’t fit, it’s 40 euros (57 US dollars) or you leave your bag (which in my case which had my laptop, DSLR, and point and shoot cameras in it) at the gate.
Again, I had been so careful that I compared the measurements online to make SURE I was OK, but when I went to stuff my bag in the box, it didn’t fit!  Oh my gosh.  I looked at my bag and saw that two of the compartments were hard around the edge to protect the contents, so they weren’t going to get any smaller, but the outside pockets were what made the bag too big, so I started moving things around.  As I was moving things, the entire mob of people (there’s no method for boarding, so it was just a giant blob) was watching my EVERY move with pity.  Maybe five minutes into my rearranging, and maybe the second or third time to try to stuff it into the box, two women came and tried to help me but it just wasn’t going to go.  They went back into the line and I continued to move things.  At one point, I pulled out an apple (my audience laughed), while I continued to move stuff around.
After taking my apple and translating book out of the bag and putting them into my pockets, and a lot of rearranging to distribute items to make the bag less wide at the bottom, I was ready for my maybe forth try at stuffing my bag into the bin.  I took it and viola!  It went 2/3rds of the way in before I stopped just because I was so excited that it worked.  The crowd clapped and cheered for me and some women in the line excitedly told me to get the Ryanair woman to look over.  I waved at her, she looked over, shook her head and said no!!!  UGH.  As soon as she said no, a man from the line came over and we pushed it down (the wheels were getting caught on the bars pretty bad so it was jamming the bag).  Then I FINALLY had the Ryanair woman’s approval, and the man (thankfully) helped me get my bag out of the contraption.  It moved just fine until it got up to the top where the wheels caught on the bar again.
And no, the overheard bins on the plane weren’t as small as the metal bin.  My bag went in and out with plenty room to spare!