This week my boyfriend found out he had a day off so I arranged to take the same day off for a three day weekend.  We decided to book a trip to one of the international destinations offered by Southwest Airlines since we have a companion pass and after a lot of looking into flights, the one with the only realistic availability was to Belize City, Belize.  We booked the flights three or four days before, booked an Airbnb and on Friday were off!

When we arrived in Belize we went outside and peeled off a few of our Winter layers while waiting for a cab.  We thought we were in a cab line but the drivers didn’t seem to notice and the first one to arrive after about ten minutes stopped at the middle of the crowd and accepted the first couple who came to him.  He then also grabbed a passenger who was traveling solo, and then us!  An interesting start to our journey since it was a five seat car and we had six people.  Thankfully the couple who had first joined doubled up in their seat and Martin and I hopped in.  The four of us in the back seat were all headed to the ferry to go out to the islands, hoping to catch the last one of the day at 5:30.

While the ride was crowded and warm even with windows rolled down, we were grateful to have gotten a driver who was aggressive enough that he got us through the bit of traffic and to the ferry before we missed it.  We arrived about five minutes before 5:30 and gave our bags to the staff to put on the boat while Martin ran to buy tickets for us.
By the time we got on the ferry, we had long before lost sight of our luggage and were praying a) the people who took it really worked there, b) that it was on the same ferry as us and c) that WE were on the RIGHT ferry.  Martin expected the ride to last about 15 minutes and I thought I’d read it would be 30, so as we approached 40 minutes and the outside quickly darkened, we really started to worry.  Thankfully after about 45 to 50 minutes, the boat slowed down and we could see we were approaching an island.  I asked the lady next to me what island it was and felt SUCH relief when she said Caye (“key”) Caulker!  Our next relief came when we stepped off the boat and found our luggage had traveled with us and was on the shore.  We quickly grabbed our bags and found the taxi driver our Airbnb hosts had sent for us, Max and his golf cart.
Max pointed out the places to eat and told us the names of the streets (Front Street, Middle Street, Back Street) as we rode along.  After ten minutes or less we arrived at our little cabana, “Gumbo Limbo” and were able to settle in.  We had two bikes with the place and after putting our things down we hopped onto them and hoped to not get lost as we made our way back to a restaurant Max had pointed out that one of my friends had recommended, Rose’s Seafood.
Each night Rose’s has a table sitting in front of the restaurant by the street with a selection of seafood.  You pick what you want from the street and then they’ll take it to the grill while you find a table.  We ordered a lobster and some sort of fish. 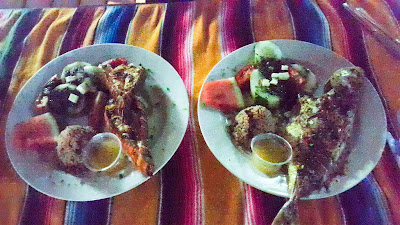 The next morning after sleeping in, we headed out to find brunch and ended up at La Cubana since all the other places we tried to go to were closed.

We had pancakes and eggs with some cheese and fruit.  Martin even had some fresh watermelon juice.. yum! 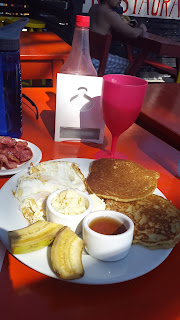 We spent the rest of the day riding our bikes around an exploring the island.

We rode around the town for a little bit, then took a trail just off of the water that took us through a more vegetated area. 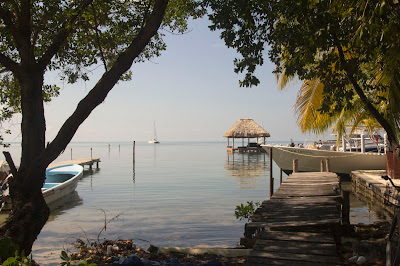 We spent the late afternoon at The Lazy Lizard, a popular hangout at the split where years ago a hurricane cut through the island, leaving a channel.