I made it!  I arrived in Paris yesterday (Thursday) morning around 10 (Paris is seven hours ahead of Texas).  When I got off of the plane, a CEA (Cultural Excursions Abroad) person was waiting for me.  After another student arrived, we loaded our luggage into a van and were driven into Paris.  I thought the airport was in Paris–not quite!  It took at least forty minutes for the driver to get us to the CEA headquarters.  When we got there, we had a short orientation and then were sent back to the car to be taken to our apartments.

I’m so glad I’m getting to live in an apartment.  We were able to pick between living in an apartment, dorm or Parisian home.  Since I can basically say I don’t know ANY French, I figured the home was out of the question, so I went with the apartment.  Our apartment is in the 13th district.  We’re on the top floor of the building and our apartment is two stories.  There are four of us in the apartment right now; two of the girls here just finished the spring semester here and they will move out tomorrow, so it’s going to end up being just two of us for the whole month, so we’ll each have our own rooms!  Very cool.  Pictures later. 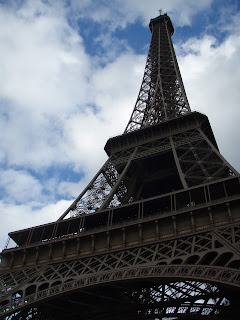 After seeing the apartment and taking my stuff in, my new roommate and I went to find the nearest grocery store to get some food.  Oh gosh.  We got a little lost (by “lost” I mean that even though I was following my iTouch, I took us in the opposite direction because “Southwest” didn’t mean anything to me!)  We eventually figured that out and got to where we were going, then we were just mentally a little lost in the store!  And they didn’t have any macaroni and cheese in a box, I was sad.  You see, I’m not exactly gifted when it comes to cooking, so here I’m a completely lost cause.  Anyway, we got a few items, successfully bought them without the cashier talking to us and finding out we had no clue what we were doing, and completed our first adventure in Paris.

Next, we had to drop our stuff off at home and then go back to the CEA headquarters using the metro.  Guess what?  We got lost again.  Oh well.  We made it eventually.  The people who work for the program are really friendly.  We found out that we will have an excursion (that’s included in our trip) to Dijon and Beaune at the end of June!  Very cool.  There will be mustard, gingerbread, and wine tasting.

After we were finished talking with the staff at CEA, the five of us students who went to the meet-and-greet walked over with one of the staff members to a bakery to buy baguettes then to a store to buy cheese to take to the Eiffel Tower to have a picnic.

We had a great time.  On our way back to the metro (it was getting pretty cold so we left), I noticed a girl wearing an A&M sweatshirt!  I asked if she was from A&M then showed her my ring.  I found three other Aggies in Paris!  Crazy!  They were there with the A&M marketing study abroad program.  The girl in the sweatshirt is one of our Women’s Basketball National Champions!