Today we got ahead of our itinerary a little bit and toured Jodhpur, the blue city, before heading to Jaisalmer. We started off by going to Jaswant Thada (Jaswant was also our guide’s name), a memorial overlooking the city that was built in 1906. Behind it you could see the city wall along the tops of the hills, along with a fort, and Umaid Bhawan Palace, a modern palace/hotel. It was interesting, unlike the other places we’ve visited, at this one we had lower priced tickets (30 rupees), but had to purchase a photography permit as well (maybe 10 rupees). The memorial is home to numerous royal tombs, but no bodies are buried there. All were cremated and scattered in the Ganges River.

Once we finished at Jaswant Thada, we went a few miles over and up a hill to Meherangarh Fort, a fort that overlooks the city. Once again, we had to purchase tickets, a photography permit and this time elevator tickets. We’ve seen a lot of forts, but they all have interesting aspects that set them apart. For this one, it had four lavish rooms that were just incredible: Sheesh Mahal (Hall of Mirrors), Moti Mahal (The Pearl Palace) where the king would hold court, Phool Mahal (The Palace Of Flowers), and Takhat Vilas (Maharaja Takhat Singh’s Chamber).

The fort also is home to the Mehrangarh Museum, where we saw palanquins (boxes with horizontal poles where royalty would be carried), weapons, paintings, and royal cribs. Our guide explained to us that the way to tell a Muslim sword from one that is Hindu is to look at the shape. He said Muslim swords are curved, while Hindu swords are straight. 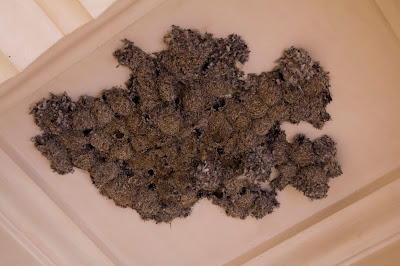 After parting ways with our tour guide, we headed on to Jaisalmer, about five hours on the road. During our exciting bathroom break about half way, I found myself locked in a toilet stall.. hooray! I would turn the handle to get out, but the tongue wasn’t quite clearing the catch, so I was stuck. Hajar tried to open it from the other side but couldn’t. Thankfully after a few minutes, a lady attending the restroom tried for a bit and got it to open.  A couple of hours after that when we were just outside of the city, Gajraj stopped so we could visit a military museum.
Once we arrived in Jaisalmer, we dropped our bags off and went to dinner. It’s funny, I’ve started using my credit card more the past few days so I don’t run out of rupees, and I keep having men tell me they don’t take cards. Then if I say I’ll just buy less (spice shop yesterday), or keep pushing (dinner last night), they take it! And it’s far from the only thing we have to push back about.. going somewhere we want for dinner vs. somewhere we’re told we should go has also been a regular event. Oh well.. we’re figuring it all out!
————————————–
Planned itinerary: 8th Feb: Day 06: Jodhpur-Jaisalmer (300KM)
After breakfast drive to Jaisalmer; Jaisalmer – a fairy-tale town in the Thar Desert founded about 800 years ago by Jaisal. Unlike any other city, this desert fortress is one of Rajasthan’s most exotic and unusual towns. Jaisalmer, an important ancient trading centre because of its strategic location on the camel trade routes, is often described as the ‘golden city’.
The havelis, built by merchants of the 19th century, are exquisitely carved from golden-yellow sandstone and are still in a beautiful condition. The fort built by Rawal Jaisal in the 12th century, stands on the 80-meter-high Trikuta hill, with beautifully carved Jain temples. The annual desert festival takes place in January and February each year and is a riot of colour and activity. Jaisalmer is also famous for its embroidery, Rajasthani mirror work, rugs, and blankets, antique, silver jewellry, and stonework and camel safaris.
Check in to hotel Desert Tulip.  Overnight at Jaisalmer.
Actual itinerary:
Later proceed for half day city tour of Jodhpur visit the Meherangarh Fort, situated on a low sandstone hill. The palace apartments like Sukh Mahal, Phool Mahal, and Sheesh Mahal etc are beautifully decorated and house Jewellery, costumes, armoury, palanquins, howdahs and other remnants of the past. See the Jaswant Thada, an imposing marble memorial to Maharaja Jaswant Singh II built in 1899. Later the royal crematorium and three other cenotaphs were also built here.