On the eighth day of our trip, our tour took us out to the Dingle Peninsula.  We stopped at a few stores along the way.  The first one was just outside of Killarney at the entrance to the Gap of Dunloe called Moriarty’s.  I bought a couple of instruments for my niece and nephew while there and my sister found a few gifts as well.  The next stop was at a jewelry store called Brian de Staic.  The store specializes in engraving jewelry with words written in Ogham, an early medieval alphabet used to write the Irish language.  We had seen some ancient stones with Ogham letters etched into them on the way to the store on the side of the road.

After looking at the jewelry store, we stopped in Dingle for a couple of hours to shop and eat lunch.  I found a gift in a wool shop and Lisa found a few more gifts, then we had a quick lunch before getting back on the bus to continue the scenic drive. 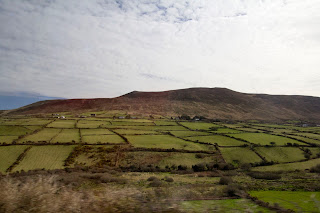 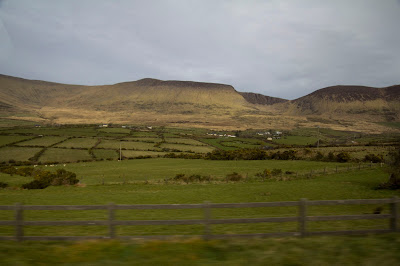 When we arrived back in Killarney, we were dropped off at Kenmare Place to go on a jaunting car (carriage) ride through Killarney National Park.  The park is one of the largest areas of natural woodland in Ireland and spans over 26,000 acres. 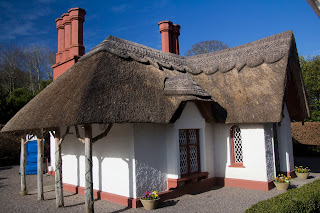 We really enjoyed our hilarious driver, he was quite the character.  Every time we passed someone in the park, he’d greet them with a loud, “Aaaahhhhhh-lowww!”

After the ride we explored the shops of High Street before having dinner at a place that served fish and chips.  When we were done with that, we headed back to our rooms at the nearby Killarney Towers Hotel.

Itinerary: “Set off this morning to follow what is perhaps Ireland’s most majestic coastal route – the stunning Dingle Peninsula. Stop at the Gap of Dunloe where you can shop for traditional Irish goods handcrafted by local artisans. Travel to the town of Dingle and then drive the beautiful Slea Head road, where some of the country’s most spectacular landscapes are found.”