Gr!  I messed up on my homework today.  I was supposed to do all of pages six and seven but I did exercises six and seven.  The directions got lost in translation.  Since our professor always writes out the numbers that we’re supposed to complete, I saw those two numbers and did them.  Oh well.  We went over it in class and I was so confused when everyone else had done all of it!  It was the second time that I’ve had homework trouble.  The first day we had homework, there was a picture and we were supposed to write names of classroom supplies on the blackboard in the picture, but I thought we were supposed to label it… ugh. 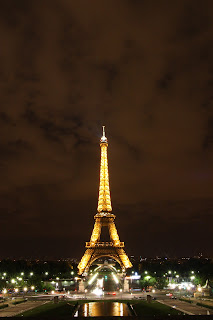 This afternoon I used some Dove lotion that the girls before us had left behind.  I put it all over my legs and it smelled awfully strong and didn’t go on very well.  It was really white like sunscreen and I had to really rub to get it to blend in.  Weird.
When my roommate came home, since it smelled so strong, I mentioned that I had tried it and she said she could smell it and then after a few seconds said, “isn’t it for the shower?” ….it was shower gel.  But it was in French, and said creme, so for two weeks I had seen it in the bathroom and thought it was lotion.  She said she did the same thing but on her hands.  I should have thought something was up when I washed it off my hands and it was all foamy.  Oh dear.
Today I came home after class and had to take care of lunch, laundry, some packing and studying for class.  I went out for a little while and went to CEA to pick up my ticket to go on the boat ride up the Seine, and I went to the Eiffel Tower to take pictures for a little bit.
Friday after class I’m going to the airport to fly to Barcelona.  Whoop!