A couple of weeks ago, my parents sent me the information for a friend’s daughter who lives in Paris.  Wednesday after class, I went to La Défense and met her (Kerry) for lunch.  After lunch, I FINALLY got some stamps and mailed the postcards that I bought my first week in Paris!  I still need to send the ones I bought in Barcelona… couldn’t find stamps while I was there!

Once I mailed my postcards I headed over to the Musée Rodin because I had just enough time to see it before I needed to be home for a meeting at my apartment.  I really liked the museum.  Around half of the statues were outside in gardens, and thankfully the weather had cleared up for the afternoon so it was beautiful outside and wonderful to walk around.

Wednesday night, Teresa and I went to La Défense so I could take some night pictures of the Grande Arche.

On Thursday, I began my day with an NACT conference call at 3 am (8 pm at home).. yeesh!  Later (much later in comparison to the call) in the day I went to Montmartre to follow the walk in my book.  It took me by Place Pigalle, Sacré-Coeur, Place du Tertre, St.-Pierre de Montmartre, Musée de Montmartre, and Moulin de la Galette to name a few of the sights.  I really enjoyed it!  It was a pretty area and I got to see a lot of parts of it that I hadn’t seen the other couple times I had been up there.

One spot that was particularly fun to stroll through was Place du Tertre, where TONS of artists were selling their work and painting in the square.  Teresa and I had walked through there at night when we went to Sacré Coeur and had seen some artists, but in the daylight it was full of them!  There was some really beautiful and different artwork.

When I finally finished the walk (they’re a little hard to follow and I ALWAYS end up getting turned around at some point), I headed home to get ready for our CEA farewell dinner (the students taking classes taught by CEA leave tomorrow) at La Mosquée de Paris.  The CEA staff member who I talked to said the place is a Mosque, a restaurant, and a bath house..?  Strange.  Anyway, I’m so glad they had our dinner there!  It was a really neat experience.  I had lamb couscous, and we all had this GREAT tea, and little pastries for dessert.  OH!  And there was a celebrity sighting!  Side story time.

Ok. So I think I’ve randomly seen one celebrity ever in my life. It was the singer Usher (Usher Raymond).  I was walking down a hallway on Capitol Hill on my way to a hearing, and I saw these two monster body guards next to him and.. well.. yeah.  There he was.  Anyway, we were sitting at our table and one of the girls, Anna, says “Hey, that guy looks like Usher” and the girl on the other side of her (Kaylee) and I look up at this group of guys walking by and just say “umm.. no.”  Well a few minutes later, we found out the people we were looking at weren’t who she was talking about.  The guy she was talking about DID look like Usher!  He was sitting like 30 feet away from us with two women and a man who looked like he was probably bodyguard!
We all started to wonder if it really was him, and when we saw him being served right after sitting down when we hadn’t even had a waiter come to our table in ten minutes, we decided it was.  Cool!  So now the only celebrity I’ve ever seen, I saw in Washington, DC and again in Paris, France. Weird! And a little bit awesome.  He waved at one of our girls as she took a picture.  I had my good camera with me so I got some shots too.  Haha, ohh dear.  One of the guys in our group was taking a picture of a couple people in our group (as a cover, it was actually to be of Usher of course), and Usher saw and just threw his hands straight up into the air.. hah!  I think they were in and out before we even got our food. 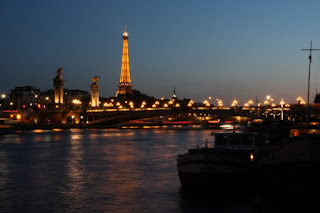 After dinner I went home and grabbed my tripod and went to Pont Alexandre III, and Place de la Concorde to take pictures.

Today (Friday) I walked around the Jardin des Plantes after class for a little bit.  Couldn’t stay too long, I have to pack and catch a train to Geneva, Switzerland at 4 pm!