On Tuesday morning, our tour bus left the hotel at 7:25 am for the Vatican.  Mom and I were planning to get our own tickets to go in to the Vatican museum and Sistine Chapel (no pictures allowed) since we’d already seen in St. Peter’s the day before, and because the price through the tour company seemed like a little bit ridiculous (50 as opposed to 15 Euros).  While we were on the bus though, our tour director announced that the museum wouldn’t be open for regular tickets when we arrived.  Ugh!  I asked him what time the museum opened for the public and he said 10 pm, so we ended up signing up to go with the group.  I thought that was kind of lame that they would take us somewhere like that where we were left with only the option to pay them more money or not see anything, but perhaps that’s how these things go?  (The tour is through a company called Cosmos.  My aunt and cousin had taken a tour with them several years ago and loved it.)

Well, our tour director took us to our local tour guide who would take us through everything, and we got in line.  While we were in line, I was curious so I asked one of the staff people at the Vatican what time the museum would open to the general public.  They said 9 am.  I wasn’t surprised.  We are not fans of this tour director!  All he does is talk (WAY too much) in circles and try to sell us things.  He’s not organized, he gets everyone confused, isn’t thorough, and then is just plain shady.

Anyway, thankfully our tour director wasn’t with us for our Vatican tour!  We had a really fantastic tour guide who was passionate about the material; he studied art history in school.  He was so interesting!  He told us that it took nine years to paint the murals in the Sistine Chapel, but that in the 1980s restoration of the artwork began and it took 20 years to clean everything!  There were patches in spots across the chapel that showed how dirty it was before the restoration, it was almost black.

After that, our tour guide took us through St. Peter’s Basilica.  I was glad mom and I had gone the day before before so we were able to focus on what he was saying instead of gawking at our surroundings!  It was nice to learn a little bit about the art inside of it.

Once we finished lunch, we got back on the bus and went to the Colosseum.  Very cool!  We still had our guide thankfully, but I wish we would have had time to go up to other levels; we just stayed on the level that you enter onto.  From there we walked over to the Roman Forum and he took us on a quick tour of that as well.  It is crazy how many ancient ruins there are in Rome; it felt like they were all over the place!

Between 1 and 2 pm, we finished up with our tours and were taken back to the bus.  Thankfully they let mom, aunt Nancy, Jennifer and me stay in town so we didn’t have to ride the bus back to the hotel and then the metro back to the tourist areas.  Jennifer wanted to see Circus Maximus, the old grounds where they would hold chariot races, so we walked over there for a little bit.  There wasn’t anything there that we could see, but there were some fences up around one end so maybe there was something covered by those.

Then we walked by the Arch of Janus and made our way up to the Monument to Vittorio Emanuele II.  Woah!  I really love the Lincoln Memorial in Washington, D.C. and always think that it’s just MASSIVE when I see it, but this thing was many times the size of the Lincoln Memorial!  It was INCREDIBLE.  HUGE!  From there, we walked to the Pantheon, a building Nancy and Jennifer had been really excited about seeing (they’ve been to Italy before and had seen the other things we’d been to).  By that point our feet were pretty darn tired, so we didn’t stay very long. 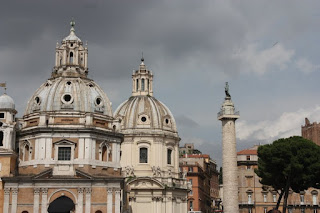 On our way back to the Colosseum to catch the metro, we stopped to get some pizza at a little restaurant.  We noticed a TON of photographers at the next business over, a theater.  After asking our waiter, we found out that some politicians were going to a show in the theater or something.  We had fun watching the group’s reaction each time a new politician came.  At one point, they all started to get really anxious and we could tell someone very important was about to arrive, so I got out my camera since I was sitting in a prime photo taking spot.  I shot a picture of the man who seemed to be the most important of all the people who had gone through (he got the biggest reaction and the crowd disappeared once he went inside), and then showed it to our waiter to ask who it was.  It turned out I took a picture of Giulio Tremonti, the Italian Minister of Economy and Finance, and he was looking right at me!  Geez, between Usher and Tremonti, I guess I could start a paparazzi/newspaper photographer portfolio now!  I’ve already seen him come onto the TV in two different segments since I started writing this.

On our way back to the hotel we stopped and got some gelato.  Yum!