Today our tour group went to Venice for the day.  Gorgeous!  It really looks just like it does in the movies, unlike so much of the other stuff I’ve gotten to see in person.  We started off our day with a gondola ride!  Mom, Nancy, Jennifer and I shared a gondola with two other people from our group and the ride began at the Grand Canal and then went through smaller areas.  It was a lot of fun, we had maybe five gondolas of people who had signed up for the excursion, and one of the gondolas had a singer and an accordion player who “serenaded” the group for the whole trip!  SO much fun.  I took a video during one of the songs: Venice Gondola Ride 2011

After our gondola ride was finished, we got some gelato before meting our tour director to be taken to a glassblowing business to watch a demonstration.  The demonstration was neat, I’ve always thought it would be fun to blow glass, but it’s WAY too hot for that in Texas!  They had some incredible pieces for sale, some that were 20,000 euros! 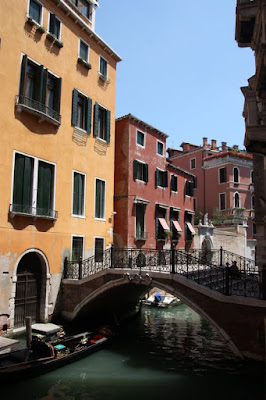 Once we were done looking at the glass, we got in line to go inside of St. Mark’s Basilica.  We weren’t allowed to take pictures inside, but it was pretty different from others that I’ve been inside of.  The ceiling was just COVERED in tiny gold tiles.  They also were pretty smart with their (common) rule about not allowing people with shoulders or above-knee skin showing; they sold pieces of paper (kind of like a giant napkin) that people could tie around their waist or shoulders so they could still come in!

From there, we made our way through the winding little streets to Rialto Bridge, a must-see according to our tour director.  We saw a ton of masks for sale on our way there; they’re for sale all over Venice, just like the Venetian (and fake Venetian) glass.  It was SO HOT.  There weren’t any clouds and it was in the 90s; I know I’m from Texas, but we have AC, most places here don’t!  Plus being outside walking in the heat (and much of the time full sun) all day long is pretty rough even if it’s only 90 something!

Around 1:00, we met our tourguide and got back on the boat for an excursion that included a tour of the lagoon and trip to the nearby island, Burano.  Unfortunately I fell asleep for the whole 40 minute ride to Burano so I didn’t hear anything the tourguide told us.  I’m staying up pretty late trying to keep up with this blog and figure out some things that will be changing when I get home, and then getting up at 6 or 7 every day.  Blegh.  Anyway, in Burano we had a little lace-making demonstration in a family-owned store.  Our tour director told us Elton John (who owns a house facing the lagoon in Venice, by the way) is a customer and that Giorgio Armani tried to buy the business!

After that, we walked around the town for a little bit (we only had one hour there) and tried to find a house where Maria Callas and her husband had lived.  Mom was very excited about seeing it, but our tour director had given us directions before going inside of the lace store along with directions to at least two other places.  He does that a lot.  By the time we tried to find it, none of us really remembered what he had said, and we weren’t sure we had ever understood, anyway.  Overload of info in an unorganized order as usual.

Burano was so much more quiet than the main area of Venice where we had been earlier in the day.  All of the houses were so cute and brightly painted!  Our hour went by quickly and at the end of it, we met everyone back at the boat and went back to pick up the others from the main part of Venice before heading back to the hotel.