This morning we packed up, caught a quick breakfast at the hotel then were in the car by 9 am for our 150-kilometer drive to Agra.
I forgot to mention this in my previous post, but driving in new countries is always fascinating to me (along with seeing monkeys out and about). My first trip in a car in Belize, I thought we were going to crash. Same deal here! When the driver picked me up at the airport, I was immediately thrown by his steering wheel being on the right side and driving on the right side. After that quick surprise wore off, I was more permanently shocked by the fact that he didn’t seem to stay within any lines. Thankfully we made it to the hotel just fine.
The same went for today. Our driver Gajraj told Hajar, “You need three things when driving in India.  Good horn, good brakes, good luck.” SO true! I cannot imagine having to drive here; he’s constantly passing or swerving to avoid bicycles, people, cows, dogs, buffalo, rickshaws, tour busses, cars, and I’m sure we’ll avoid hitting many more things before we’re done. Whew!
After maybe two hours of driving, we stopped for a quick break. While Hajar and I were in line to get coffee, two men cut in front of her to go to the front of a line of maybe ten women. After a few seconds of astonishment, Hajar told one of them there was a line and it wasn’t his turn. A British woman behind me yelled, “Back of the cue!” A few minutes later while waiting for the coffee, another British woman looked at the line and said to me, “He never did queue, did he? Men. They just can’t wait for anything.”  Haha! Thought it was funny coming from a woman from another country.
Once Hajar got coffee, we went to a small convenience store and bought some chips and bottled water. The store had Texas BBQ flavored Pringles!! Funny, small world.
Sometime after, we arrived in Agra and checked into our hotel room, where we had a distant view of the Taj Mahal. After a short break, we met our new guide and Gajraj drove the three of us to the outskirts of the Taj Mahal.
We had to stop a few kilometers away because there’s a no-pollution zone around the monument; pollution has been found to discolor the marble. After purchasing our tickets for 1,000 rupees each ($14.88) and electric shuttle tickets for maybe 20 rps ($0.29), we made our way to the gates.  For once in life, a women’s line was shorter! We quickly went to the front of our line to walk through a metal detector and have our bags scanned and hand checked before entering the gates.  We had to wait a few minutes for our guide as his line was much longer.
We spent a few minutes, listening to our guide as he talked about the entryway to the Taj Mahal. Each gate was for a different group. We entered through the gate for the people, then there was a gate for the builders, and a gate for royalty.  He also pointed out the 22 domes on top of the entry gate across the plaza which he said represent the 22 years it took to build the structure. Then we continued on to enter the gates. My gosh.  It’s every bit as stunning as the photographs and one-hundred percent worth the visit; it takes your breath away. 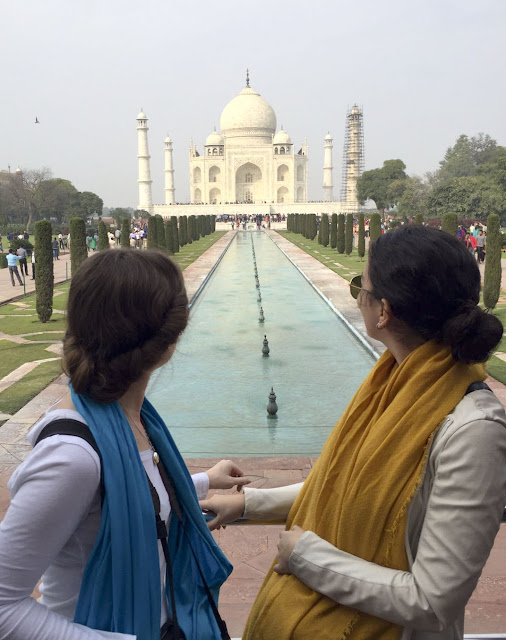 Our guide explained the extent to which the building was planned, from a mosque on the west end (facing Mecca), to a building identical to the mosque on the east end just for symmetry’s sake, and the fact that the four minarets are slightly leaning outwards so they’ll fall away in case there’s an earthquake.  When we got closer to the building, he pointed out the verses from the Koran around the entrance, each character a solid piece of Onyx, inlaid in the marble.  These verses he said were created so they would look of equal size from top to bottom, using larger text to accommodate as the text gets farther away.
To go inside of the mausoleum we had to put coverings on our shoes to protect the marble.  We weren’t able to take pictures inside, but at one point a man held a flashlight up to the red stones within the marble and they lit up.  The only non-symmetric aspect of the Taj Mahal is the tombs inside.  The building was meant to house only the body of the queen, but at the direction of his son, the king was buried next to her, breaking the symmetry. According to our guide, the king had planned to build a black Taj Mahal on the other side of the river, in line with this one to continue the symmetry and planned to be buried there.
One of the four minarets was covered with scaffolding and our guide explained that they’re covering the marble in a mud bath, similar to what women put on their faces sometimes to draw out impurities.  They cover it in mud, let it dry, then come back and wash it off with soft brushes and distilled water, revealing a far brighter, clean marble.
On our way out, we saw a man with bright orange hair (henna), one of several we’ve noticed so far on the trip. Hajar wanted to take a picture with him, so our guide asked, and the man allowed it. We also saw a couple of monkeys on our way out, and a beautiful green parrot up in a tree. So cool!
On the way to our next sight, we stopped by a store where we were given a marble demo, showing how the marble was chiseled away and how the precious stones were ground down and glued into the spaces. Really an amazing process.
Our final sight of the day was Agra Fort. While touring, we ran into our guide from the day before! The red sandstone fort is on the other side of the river from the Taj Mahal, and was home of the emperors of the Mughal Dynasty until 1638, when they moved to Red Fort in Delhi.
For dinner we went to a place called Taj Mahal Restaurant and had chile chicken, chile paneer, tandoori chicken, chicken tikka masala and garlic naan and were thoroughly disappointed in the last three items.  Lesson learned: try to avoid the tourist traps our driver pushes us to visit! That night we tried some whiskey our driver had bought for us.
————————————————-
4th Feb: Day 02: Delhi – Agra (250Kms) + Sightseeing
After breakfast drive to Agra; Later Arrive Agra and transfer to Hotel Four Points by Sheraton. Agra came into limelight during the rule of Afghan King Sikandar Lodhi – who had made it the capital of his empire. Later in 1526 A.D., the Mughal   Emperor Babar took upon himself the task for rendering Agra, a unique character and beauty of its own. Agra – in terms of ambiance is still associated with its Mughal period. The Mughals besides being great rulers were also great builders and they preserved their best architectural wonders for Agra & its neighbourhood. It has many wonderful monuments and the Taj Mahal, the greatest of them all, is a masterpiece of Mughal architecture at its best.
Later visit the Taj Mahal (closed on Friday) – The Taj Mahal is everything that has been said about it and more. Built by the Mughal Emperor Shah Jahan as an expression of his love for his wife Mumtaz Mahal, in mid 17th century, the Taj Mahal is truly one of the wonders of the world. Though the Taj appears to be amazingly perfect from almost any angle, it is the close-up marble inlay work, which is really astounding.
Later visit The Agra Fort, an outstanding example of Mughal architecture. Agra Fort – the seat and the stronghold of the Mughal Empire under successive generations. This was the seat of Mughal rule. Shahjahan added the impressive quarters and the mosque while Aurangzeb added the outer ramparts. Visit its Hall of Public Audience and its Royal Pavilions. Besides the historical monuments, one can also explore Agra’s rich heritage of handicrafts in its markets.
Also visit Itmad ud Daula –This tomb was built in 1622 for Ghiyas Beg, father of Empress Noor-Jahan, the wife of Emperor Jahangir. It is beautifully conceived in white marble, mosaic and lattice and set a precedent as the first Mughal building to be faced with white marble inlaid with contrasting stones. Sometimes also called ‘Baby Taj’, it is small, intimate and has a gentle serenity.
Overnight at Agra.