Today on our way to Jaipur, we stopped on the way to see Fatehpur Sikri, a city that as built by the Mughal Emperor, Akbar to be his capital for ten years during the 16th century. We started off by visiting the palace. To bring the people together, Akbar, who was Muslim, had three wives who were Muslim, Hindu and Christian, and each had a bedroom and place of worship built in the palace. The Hindu queen was the only one to have a son, so her area was far larger than the others.  In the room of the Muslim wife, there were originally mirrors in each recessed space of the wall and precious stones around them. 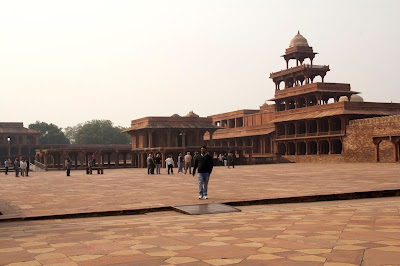 After looking at the palace, we headed up the hill to Badshahi Darwaza Gate. When we entered, we saw Jama Masjid Mosque, the tomb of Cheik Salim Christi, tombs, and a great plaza. We each both bought a piece of fabric, flower petals and a piece of string to leave in the tomb.  Unfortunately you can’t take pictures in the tomb; it was really stunning, covered in mother of pearl. We covered our heads with our scarves and then entered and handed the fabric we had purchased to a man who laid it over the tomb. We then took the string and tied it to the lattice, making a wish for each knot tied. As we continued our way around the tomb, we dropped the flower petals on the other side of the fabric, then left. Once we finished visiting the tomb, we walked into Jama Masjid Mosque, and then headed back to the car.
Continuing on our way to Jaipur, we saw mustard plants, wheat, and lots of other sights. There were a number of brick factories along the way, with tall towers burning cow and buffalo manure to heat the bricks. You can see the cow manure in one of the pictures below, they stack it up in very neat piles like this all along the road. Also, almost all of the trucks are decorated, including black tassels to ward off evil and the sides of many roads are painted in black and white or black and yellow.

When we arrived in Jaipur, the pink city, we got settled in the hotel where we have a view of Jal Mahal (water palace). That evening we went down to the water to take a few pictures of the palace, and then Gajraj drove us to have dinner at a place Hajar had found called Ganesh Restaurant.  When we pulled up to the restaurant, I was very worried. The entrance was a dark stairway in between a multitude of tourist trap-type shops. At the top of the stairway there were maybe four men sitting and talking. We asked if they were open and then headed upstairs to be seated. We got there a little early and were the only ones at the rooftop restaurant.. at least only ones there to eat. At one point I counted and there were 13 men there talking… and us. Yeesh! Hajar told me I was worried about the surroundings, she was worried about the food. We ordered the Ganesh special (bell peppers, onions, chickpeas, paneer, cabbage) and garlic naan, and thankfully both were wonderful. After dinner, Gajraj picked us up and we headed back to the hotel for the night.

——————————————————
5th Feb: Day 03: Agra – Fatehpur Sikri – Jaipur  (250Kms)
After breakfast proceed to Jaipur enroute visit Fatehpur Sikri – the deserted red sandstone city was built by the Great Mughal Emperor, Akbar, as his capital and palace in the late 16th century.  It was abandoned soon after it was built when the local wells went dry and it remains today in much the same condition that it was over 300 years ago.  It is complete with palaces and mosques and used to be a town larger than London when it was originally constructed. Now it is an extraordinary place to wander around with its buildings in near perfect condition.
Later drive to Jaipur; arrive Jaipur and transfer to Hotel Regenta Central.
The capital of Rajasthan Jaipur – popularly known as the “Pink City “as the Pink sandstone was used to construct the buildings in Old walled city. Jaipur owes its name, its foundation and it’s planning to the Great warrior astronomer Maharaja Jai Singh II (1699–1744 AD). Jaipur (City of Victory) was founded by Maharaja Sawai Jai Singh II in 1727. It is the only city in the world symbolizing the nine divisions of the Universe through nine rectangular sectors sub-dividing it. The architect who formalized the city’s plans on the Shilpa Shastra, the epic Hindu treatise on architecture, mixed it with the sublimity of the Mughal and Jain influences of those times. The city was painted pink in 1853 in honour of the visit by Prince Albert. Except for the busy traffic of bicycles, cars and buses, little seems to have changed.
Overnight at Jaipur.