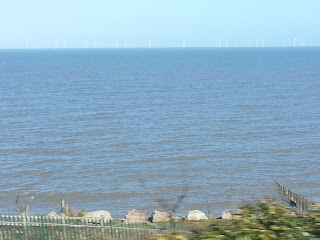 Tuesday morning we walked to Chester Railway Station and caught a train to Llandudno Junction in Wales, close to Conwy.  It was a beautiful hour-long train ride through the greenest land I’ve seen and for a good portion of it, it was that land on one side, and the ocean on the other.  Gorgeous.  We were all fascinated to see a huge wind farm 4-5 miles out in the water.. that was a first.  It was the North Hoyle offshore wind farm, the UK’s first major offshore wind farm, built in 2003.  It consists of 30 wind turbines that provide enough electricity for 40,000 homes each year!
Along with the beautiful green grass and ocean views, we also saw soo many sheep!  They were all over the place.  There was also this huge old ship covered in graffiti that we passed but unfortunately couldn’t catch a photo of it.

When we arrived at the Llandudno Junction station and walked out, we saw an antique store so we went in for a few minutes.  After finishing browsing, we continued on to a tunnel that took us under the road.  The tunnel was COVERED in graffiti art.  I was searching for “Conwy” to take a picture, but ended up finding “Lauren” instead!  We also found a painting of the castle and all took pictures with that before we continued on. 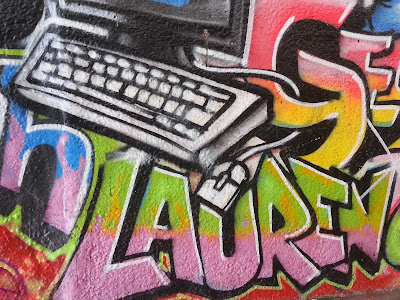 We couldn’t have asked for a better day.  We had planned to go the day before but it was stormy, and the day we traded for was beautiful and sunny… perfect!  We took a bunch of pictures of the castle from afar, an arch and the rising tide before walking across.

When we got across, we immediately went into the first gift store we saw, across the street from the castle, The Knight Shop.  We ended up spending so long in that store that dad wandered off and started texting asking if anyone wanted to see the castle!  Whoops.  Unfortunately, even though it was in the town of Conwy, it didn’t have anything for that family name!  Ugh.  After probably 30 or more minutes there, we went over to the castle entrance where we met dad.

We spent the next two hours or so wandering around Conwy Castle.  We were all so happy to get to see it since my mom has wanted to go for so long.  We climbed Prison Tower and then walked around the castle walls, then went down to the bottom and explored there as well.  At one point we stopped for a snack break to find that our crackers weren’t good.. so dad and Ella had a good time getting rid of the crackers, sharing them with birds.

From there Lisa, Ella, mom and I went up into Chapel Tower and saw some stained glass windows that were put in a few years ago.  Once we were done there, we all headed back down and out to the castle’s giftshop where I bought an etched Conwy Castle regular and shot glass, and Lisa and mom bought several other Conwy items.  Then we had to go back to The Knight Shop across the street to pick up the merchandise we had bought there: I’d gotten namesake socks and keychains for several people, plus a bottle of Conwy Mead and Conwy Mead Whiskey (the only things with “Conwy” in that store other than some little stones that had it engraved which my mom bought!).

When we finished up there, dad said we needed to head back to the station so we didn’t miss our train back to Chester.  A couple of locals helped tell us which bus to get on and where we could eat dinner: Old Station Hotel.  After fish and chips for a couple of us and other dishes for everyone else, we caught our train back.  After walking back to the B&B in Chester, mom, Lisa and I shared my bottle of mead so I didn’t have to carry the full thing back.

Th next morning, we had our last wonderful breakfast at Stone Villa and then got all of our bags out to take a taxi back to Chester Train Station.  We got to the station a little early, so we had some time to wander.  I went off on my own to look around and see if I could find travel bottles for my sister who had a couple of bottles that were leaking.  After venturing into a convenience store and thrift store, I finally found them in a grocery store, then walked quickly back to the station.

Right before we went to the platform to catch the train, my sister realized she still had the keys to our room at the B&B.. Whoops!  Thankfully I had a few pence and the business card with their number and there was a payphone nearby, so I called them and they were able to come before our train.. though when I met everyone at the platform, the train was already there!  We rode on the train back through the Llandudno Junction station to the end of the line in Holyhead where we caught a three-hour ferry to Dublin and thankfully were able to check our six bags.. wohoo!

A few minutes into sitting on the (huge) ferry, I saw a family walk by that immediately reminded me of all the gypsies I’d seen and been warned about during my study abroad.  Probably 40 minutes after that, my dad walked up from exploring the ferry and said, “This nice boy bumped into me then asked if I could buy him lunch.”  Of course, the “nice boy” was part of that group, I knew immediately.  Thankfully dad still had his wallet.

A couple of shared pizzas and several hours later, we arrived in Dublin.  On our way off the ship, Ella was able to get a second stamp on the passport Ella had made for her American Girl Doll.  When we went outside we had to wait for a long time for a taxi, only for everyone who was waiting in line to find out that we had to call the taxi companies to tell them cars were needed!  It took a long time to get one, and we arrived at the hotel an hour or more after we were supposed to be there for dinner with our tour group.  Thankfully we didn’t miss dinner though, it was one of my favorites of the trip.