Sometime last year, my parents found out about a trip to Ireland that a group in a town nearby was going to go on.  They decided that we would join the trip and add on a visit to Conwy, Wales to see the town and namesake castle that my mom has wanted to see for many years.
On Saturday morning, I caught a flight to Washington, D.C., where I met my parents who were coming from Austin.  Together, we got our next plane headed for Manchester, England.   I was surprised to see that the flight wasn’t full…. And to my disbelief, the doors closed and no one ever came to sit by me, so I had THREE SEATS to myself on a seven-hour flight!  Wow!  We arrived in Manchester at 6 am Sunday morning and waited a couple of hours for my sister and niece to arrive on their flight in from NYC+Philadelphia.  Thankfully we (amazingly) have free texting and data (shout out to T-Mobile), so we eventually were able to find each other in spite of arriving in different terminals.
From there we caught a train to go to the town where we would stay for the next three days, Chester.  When we arrived in Chester, it was raining.  Dad had planned for us to walk to the bed and breakfast where we were going to stay, Stone Villa Chester, but since it was raining we all decided it would be better to take a taxi.. and good thing we did, we had a ton of luggage.  Eight bags on wheels plus a few smaller ones we carry.. yeesh.

When we got to our B&B, we met the owners, Dave and Kirsty who showed us to our rooms.  Mom and dad were upstairs in the Northgate room and Lisa, Ella and I were downstairs in Queen’s Bridge.  All of the rooms were named after landmarks in the town.  After unpacking, Kirsty served us all drinks and cake, which we ate in a little common room at the front of the building.  Once we finished eating, we headed outside to explore the town.  Thankfully it had stopped raining.

We were staying in a neighborhood off of Hoole road and just a block over there was a street with lots of shops.  We went to The Faulkner for lunch since Dave had recommended it.  While we were having lunch, we could see the jet lag most clearly in six-year-old Ella.

After finishing up lunch, we walked into town and saw Queen’s Bridge, St. John the Baptist’s church, the old Roman Amphitheatre, Roman Gardens, and walked along a little bit of the city wall.  After a few hours, it was getting dark and we were jet lagged and hungry and ready to head back to go to bed.  On the way, we stopped at a restaurant called Kash Bar and had dinner … I had some amazingly good quesadillas there!  My niece fell asleep before the food came and had to be woken up for us to leave.  When we were walking out, my mom missed a step and fell pretty hard, so I grabbed a taxi to get us back to the B&B so she didn’t have to walk. 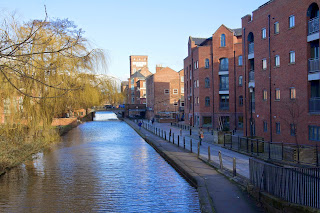 On Monday morning we each had a wonderful full English breakfast at our B&B–a fried egg, sausage, black pudding, bacon, mushrooms, a tomato and toast.  Yum!  It kept us pretty full.. we never got hungry for lunch! 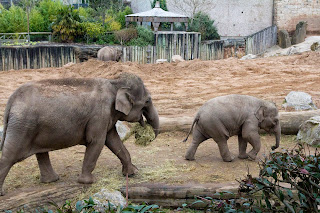 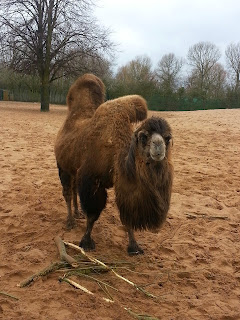 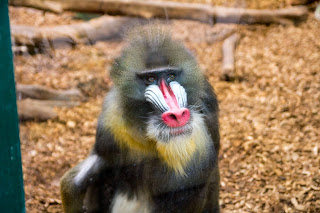 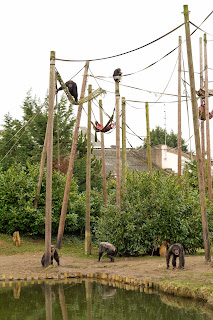 When we left the zoo, we had the taxi driver drop us off on the next street over from our B&B so we could go into a few of the thrift stores there and find somewhere for dinner.  We only had about 20 minutes before the stores started closing, but were able to go in both of them.  For dinner, we ended up getting carryout Indian, Chinese, and fish and chips.  We took it all back over to the B&B and ate dinner in mom and dad’s room.  Whew, the chicken tikka masala I bought tasted nooottthhiinnggg like I expected.  It tasted like very sweet tomato sauce with chicken chunks.. oh well.

After eating, mom, dad and I watched Saving Mr. Banks in their room.