On my third day in Morocco, we started off the day with wonderful, freshly made orange juice and one of my favorite things from my study abroad in Paris.. pain au chocolat!  Then we grabbed our bags and got in the car for Mohammed to drive us to Fes, a four-hour route that went through the capital of Morocco, Rabat. 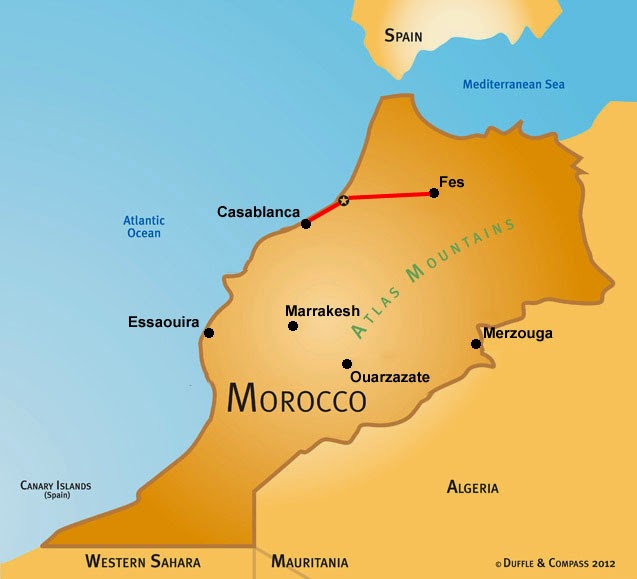 I was amazed to see the different terrain and all the agriculture we passed on that drive.  The most fascinating thing to me was that there were nomads and shepherds with their livestock just.. roaming free!  NOT something you ever see at home.  Anywhere you saw livestock, you’d see someone accompanying the herd.  We also passed many olive trees, people selling olive oil along the road, and trees that were missing their bark around the trunk, harvested for making cork!

Yet even if it felt as though we were in the middle of nowhere, we would see satellite dishes on the buildings.  Even the buildings that looked like shacks.. satellite dishes!  There were also lots of mosques, which I found fascinating.. I love that you can find them so easily thanks to the minarets (tower) that stick out from skylines.  Really cool.

When we arrived in Fes, we pulled into a dark, VERY cramped garage to park.  A man came and took our suitcases, and we followed him into the heart of Fes, where the alleys are too narrow for vehicles, so travel is done by foot, moped, bike or the back of a donkey.  They put non-metal shoes on either both front, or all feet of the donkeys to help them as they walk along the stone paths.  There were both standard and miniatures being ridden!

After following the man as he pulled our bags through what felt like a maze, we arrived at our beautiful home for that night, Riad Dar Bensouda Fes.  Hajar explained to me that a riad (Arabic: رياض‎) is a home or palace that has a courtyard or interior garden. In true Moroccan fashion, we were greeted with Moroccan mint tea and pastries that we sat and enjoyed by a small pool in one of the hotel’s courtyards.

We took our bags to our space for the evening and found we had a beautiful space with a living room, bedroom, and of course bathroom, all for 525 dirham (dh).. about $65!  Unbelievable.
A little later, our suit-wearing tour guide for the night, Mohammed arrived to take us through the Medina (market) of Fes.  We had thought he was going to speak English, but it was a little something more like Franglish, so Hajar had to do some translating.  When we started off, we saw a man with a mechanical loom putting together some sort of blanket or something, strung kind of across the pathway.  The streets were confusing and packed with goods of every color you can imagine.
I found and bought a small bullet key chain for a friend at one of the booths we found early on.  A little later, Hajar and I both bought head scarves for our upcoming trip to the Sahara; very long pieces of material that could be wrapped into turbans to protect from the sand and elements.  She bought one that was bright blue, mine, hot pink.  We did a little more shopping as we explored with our Franglish speaking guide, looking at beautiful lamps, and buying dresses.  The dress buying was pretty entertaining.. Hajar haggled quite a bit for us and we each purchased a Moroccan dress (110 and 100 dh), and I bought one for my niece.  A little later, I purchased the city’s namesake hat to take home for my nephew.  When in Fes…
We got to see the inside of Medersa Attarine, a home for students of the nearby university.  It was incredible how much detail there was in the courtyard.  Stunning. 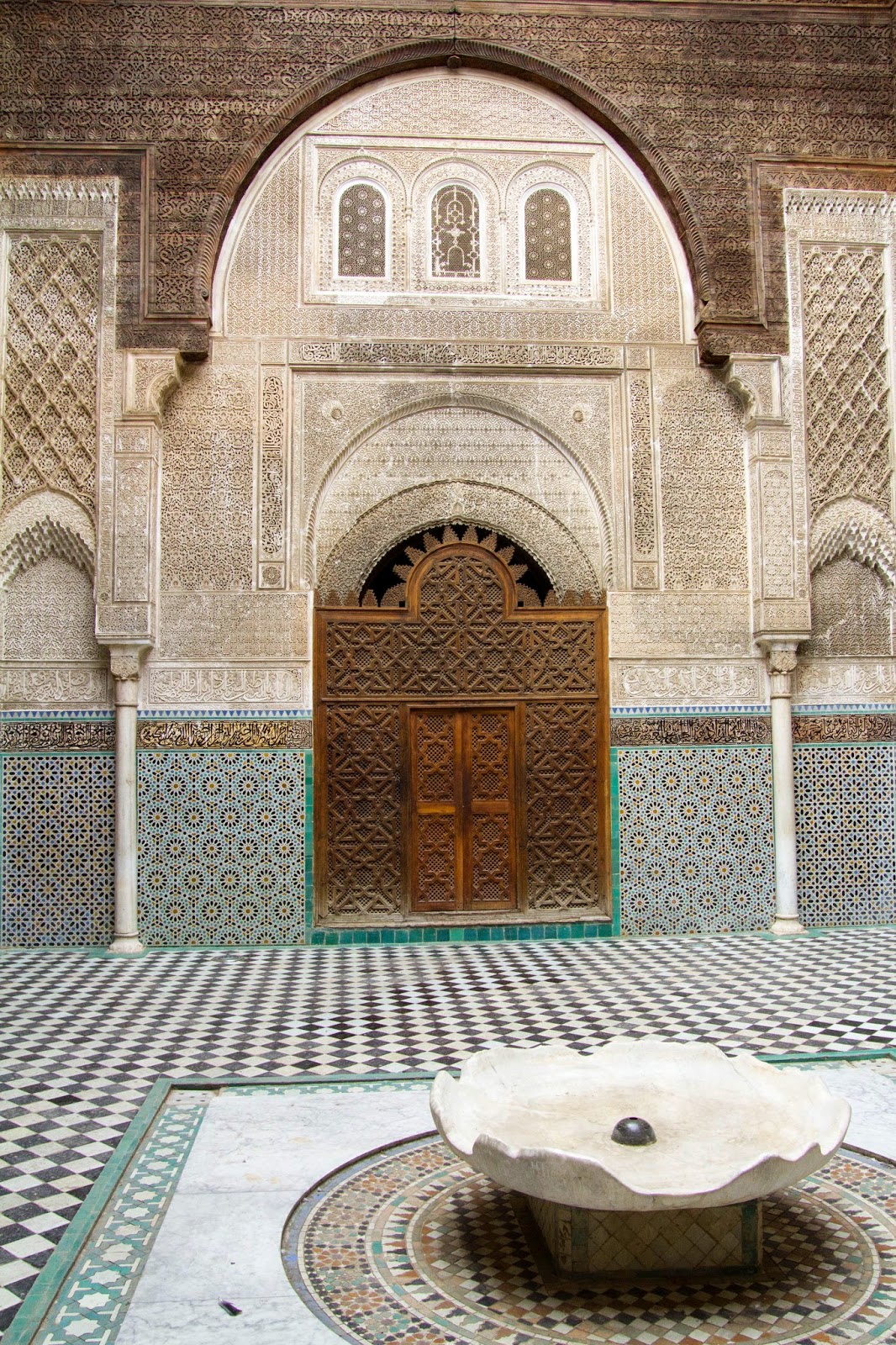 We continued on with our tour and ventured into the leather souk, what’s said to be the oldest leather tannery in the world, dating back at least nine centuries.  Whew!  There was a distinctive smell to the place.  By the balcony where you could watch the dying, there were baskets of mint leaves you could hold close to your nose to help mask the odor.  It was so fascinating.  The hides are soaked in diluted acid and then transferred to other vats with dyes made from henna, saffron, mint and other substances.  Once the dying process is done, the hides are dried on the rooftops around the area.  There were maybe 100 vats of liquid filling the space.
From the tannery we continued on, into a rug store.  Our guide introduced us to a man in the store who thankfully spoke perfect English, so Hajar had a break from translating.  We quickly discovered that he was related to her father, who was born in Fes!  He had a great sense of humor.  While showing us a rug, he told us, “we sell magic carpets, but they only fly one way: down, when we drop them from up there,” as he pointed up to the balcony of the riad-turned-store’s courtyard.  He took us upstairs to see several looms, and showed us one of the rugs, saying that by walking on both sides of the rug, the knots become more tucked into the design and over time it looks better.  He also said that by flipping the rug over and walking on it, it knocks out dirt, “do when you have guests and they can clean for you!”
After our tour of the rug store, we saw people working many other trades: women doing embroidery, men working copper into kitchen goods and decorations for the home at Place Seffarine, and booths with the most stunning fabrics I’d ever seen.

Our guide took us to the world’s oldest university, University of al-Qarawiyyin, but we weren’t able to go inside.

During our 4-5 hour tour, we tried several different foods.  I had what Hajar called a Moroccan pancake (a red..tomato.. onion thing that was absolutely delicious), a Moroccan donut, jerky (khlii) rose-flavored nougat… and finished the day off with my least favorite food, probably of the whole trip.  Snails and their stew (7.5 dh if you’re interested).
Towards the end of our tour on the way back to our riad, we came upon the same man from the beginning of our tour who had been working a mechanical loom, strung kind of across the path, still working diligently.  Before we could stop him, a young man came running down the alley and ran through the loom’s threads and went several feet before he slowed to a stop.  The man’s work from the entire day was very damaged, if not ruined.. and it broke our hearts.  The young man apologized, then left.
After four or five hours of touring the city with our guide, we arrived back at our riad, and each paid 20 dh for our private tour.  I wanted to take some pictures, so we went up to the roof of our riad for a little bit, then it was off to bed.
At some point while we were in our room, we could hear calls to prayer coming from all the different mosques.  You can hear the sound below.. again, so so cool.