The next morning we woke up, grabbed some breakfast downstairs (pastries, and wonderfully fresh fruit galore) and then grabbed our bags for our trip out of the Medina.  A man met us at the entrance of the riad with a wheelbarrow, loaded our suitcases and then we were off, back through the maze to get to the outside streets.  Here’s a short video of what that looked like:

The man with the wheelbarrow led us out of the Medina to the street to meet our guide for our cross-country tour, Hassan.  When we met Hassan, he was wearing a bright blue floor-length robe and small black turban.  We climbed into his Land Cruiser Prado where we met his friend, also named Hassan, who would drive us on our six-hour journey to Merzouga and the Sahara Desert (!!!).  As we drove out of Fes, tour guide Hassan pointed out “the American Embassy”… McDonalds!  Haha.  He also pointed out a large tower/antenna in the city that was disguised as a palm tree. 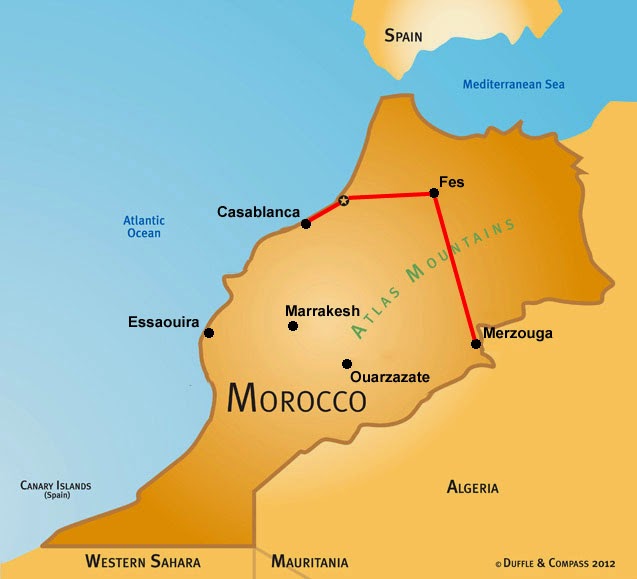 We stopped and looked at a lake, Daït Aoua, maybe forty minutes outside of Fes.
About an hour outside of Fes, we stopped for a few minutes in Ifrane, a ski town in the middle Atlas Mountain region.  We took a few pictures of a stone lion that is somewhat of a landmark for Ifrane, sitting outside of the Hotel Chamonix.  There are multiple stories about when the lion was carved and why, but it dates back to sometime in the early 30s.
As we climbed back into the car and left, Hassan pointed out the steeply angled roofs of the buildings that prevent snow from accumulating.

As we continued on, the scenery around us became a forest and Hassan started talking about monkeys that lived there and how maybe we would see them.  I kind of ignored this, thinking he was joking or if not, that it would be a rare, VERY unlikely sighting.  A few minutes later, we stopped in a small clearing with a little booth selling touristy items and a man with a very decorated horse, I suppose offering rides.  And… there were monkeys!  In the forest!

I still can’t get over it.  What the heck were monkeys doing in a cedar forest in the middle of Morocco?  My mind was blown and all I kept saying was, “HAJAR!  There are MONKEYS! …In the FOREST,” on ultra repeat.
Oh my.  All the monkey stories.  There were monkeys with a baby, so that was awesome.  They carried it around with them.. which I guess makes sense.. what else would they do?  One of the monkeys climbed up and sat on the roof of our car.  Hassan went over to the booth nearby and came back with a bag of peanuts to feed to them.  I guess because I’m used to horses, I expected them to stick their face in his hand to pick up the peanuts, but being the civilized monkeys they were, they politely picked them up with their own hands and proceeded to eat.  Then there was a monkey with an orange.. because who DOESN’T like Morocco’s incredible oranges?  One of the monkeys looked up at me and tugged on my pant leg while I held the peanuts.   At one point I guess the monkeys thought that a dog hanging around us was going to take their peanuts, so they got angry and sent the dog running for his life.  And then there was the monkey that snatched Hassan’s bag of peanuts right out of Hajar’s hand!
Monkeys.  In a forest.  What?  Now please excuse me while I go on a monkey picture binge:
Sadly, we couldn’t stay with the monkeys forever, so after maybe 15 minutes of extreme happiness, I reluctantly climbed back into the car and we continued on.  We stopped for lunch in Midelt and shared a delicious tajine of chicken and orange, fresh bread, Coke with Arabic on the bottle and of course, Hajar had herself some Moroccan mint tea.
So during our drive across the country, we traveled some of the most dangerously twisting roads in Morocco, going through the Atlas Mountains. We saw an example of this when we came across a bus, overturned in the middle of the road!

After lunch, our next stop was at an oasis to take a quick picture.  I was surprised to see children along the side of the road when we stopped.  They had woven figures of camels out of palm leaves and were trying to sell them.

After about five and a half hours on the road, we ventured off the asphalt and started making our way across rocks and sand.  Hassan let me stand up, sticking out of the sun roof to take pictures and video.  When we arrived at our hotel in Merzouga, Kasbah Mohayut, we were greeted with Moroccan mint tea.  Hassan took us up to the roof of the hotel for a good view and wrapped the fabric we had bought in Fes around our heads to make turbans!  Video of that:

Once we were ready, Hassan led us downstairs and out to the dunes to meet the man who would lead our camels into the Sahara Desert’s Erg Chebbi Dunes, Mohammed.  We asked if the camels had names and were told, “Yes.. Camels 1, 2 and 3!”  Now I hadn’t ever ridden a camel before, and if you have, you know how… alarming it is when you’re sitting on them and they either stand up, or lay down.  You feel like you’re going to fall backwards, then you feel all of yourself being thrown forwards, and then back again.  Even though I’d been warned and was as prepared as I could be.. It was dreaded each time!  Here’s a video: 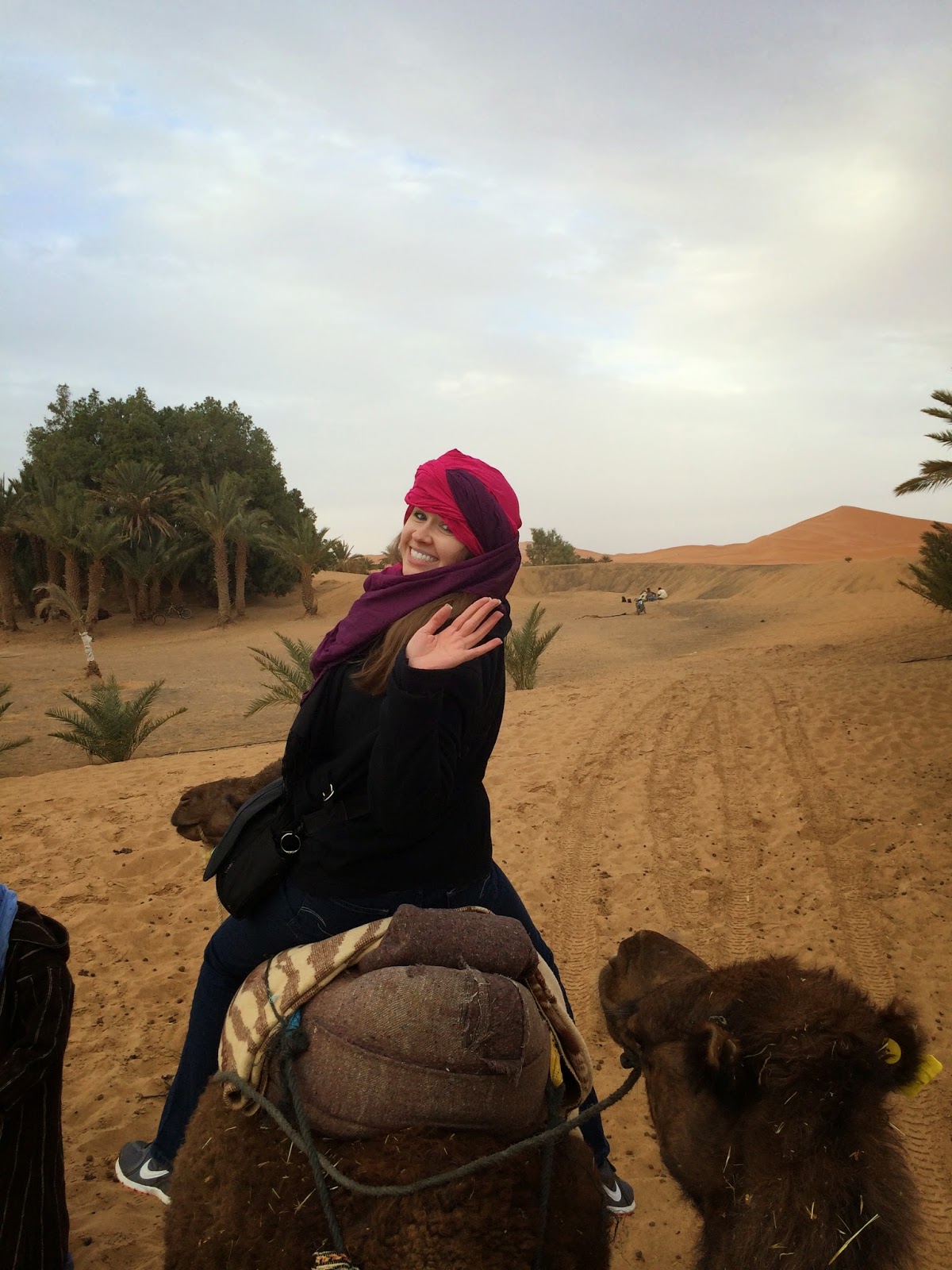 I was surprised that our guide walked, leading the camels that were tethered to one another.  I had expected him to ride and for us to be loose like you usually are on a tour on horseback.

We walked for a while out into the dunes until we came to a couple of camps.  If it had been warmer, we would have spent the night in one of the camps, but since it was January, we had decided not to.  Mohammed had the camels lay down so we could get off, and tied up one leg of each to keep them from getting up and leaving. 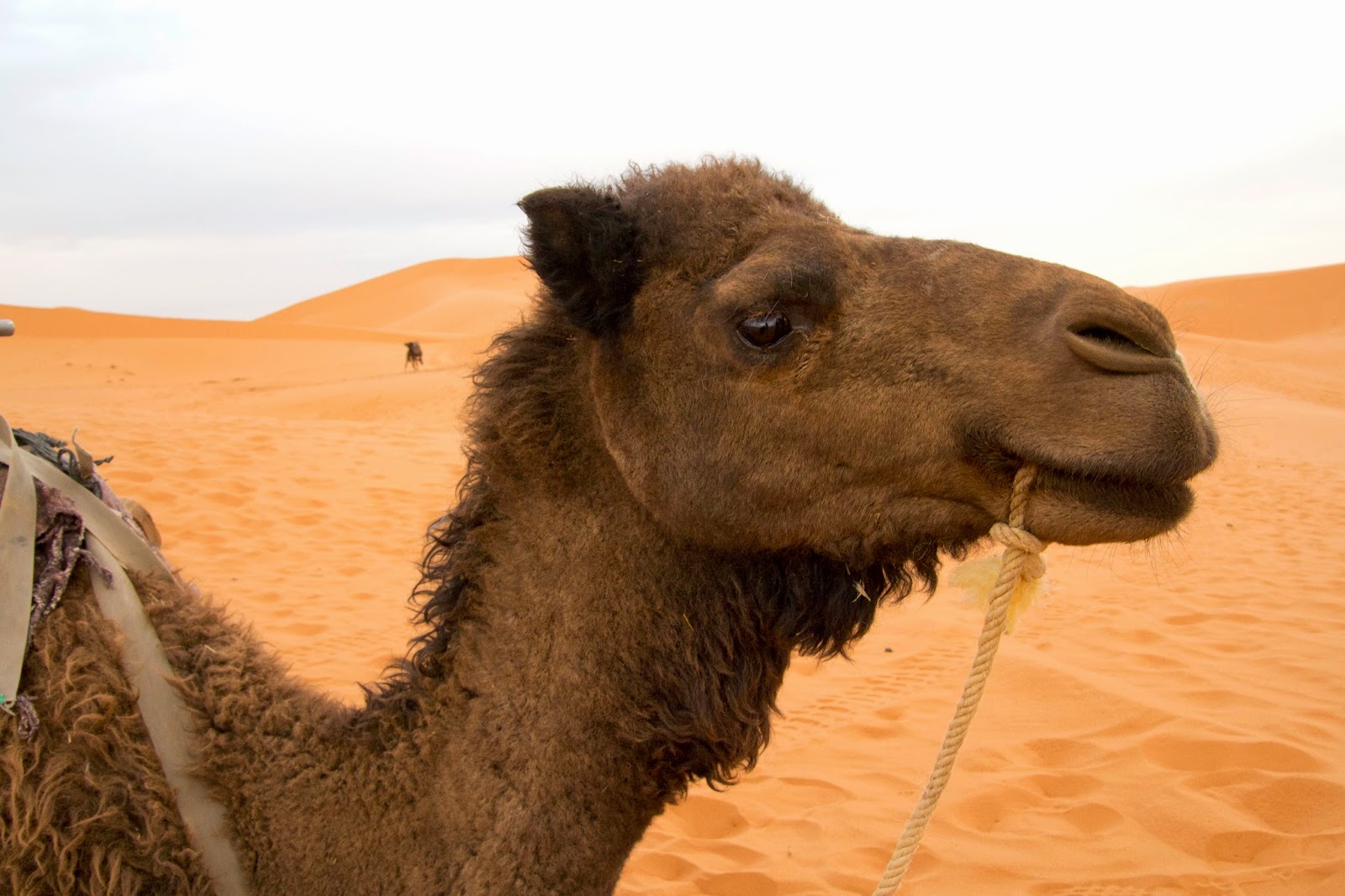 We took a couple of pictures with the camels before venturing off.

There was a huge dune in front of us, so Hajar and I decided to climb it.  Woah!  I had no idea it was so hard to walk in sand like that.. we would sink into it and frequently have to stop to catch our breath.  The top of the dune didn’t look as far as it ended up feeling/being.  We found an empty bottle on our way up the dune and decided to draw a block ATM in the sand and take pictures.  Once we got to the top, we sat down for a bit.

After a few minutes of rest, we walked back down the dune, to one of the camps and joined Mohammed, some other men, and three other tourists: one from Japan and two from Italy for some (drumroll)…. Moroccan mint tea.  We laughed while watching one of the hobbled camels of the other tourists get up and start slowly hopping away on three legs.  We were told that particular camel always does that, and his guide went to stop him.  After some story exchanges and sipping on tea, it was getting dark so we headed back to the hotel.

Before dinner, Hajar and I sat by the fire warming up and having more tea with Hassan.  For dinner we had meat from another tajine.. soo good.  We sat a few feet from a table of an (obnoxiously loud) American father/daughter duo and their poor guide.  Their stories were amusing for a short period but we were glad when we were done eating and didn’t have to overhear them anymore!  We headed back to our room for bed, but it was pretty cold and the heater wasn’t working well, so while Hajar went to get a space heater, I took this video of our hotel room:

When I took my shoes off, I found proof of our dune climb at the bottom:

Random note on having sand in my shoes.  I haven’t spotted many celebrities in my life, but there is one who I have seen a couple times, in unexpected places: the singer, Usher.  While I interned in DC in 2009, I crossed paths with him in the hallway on his way to a congressional hearing one day.  Then in Paris, I was having dinner at La Mosquée de Paris with my classmates and he came in with a small entourage for dinner.  Well, I missed him this time.. but Hajar discovered online that he had been in the Sahara Desert pouring sand out of his shoes just nine days earlier.  Weird!

Here’s the day’s itinerary (except unfortunately we skipped the last part since it was cold) as emailed from Hassan:

Day 1: Fes- Midelt-Erfoud-Merzouga-Erg Chebbi.  We will pick you up at your Riad or your hotel around 8:00 a.m.  We leave for Midelt throught he Mountains and the cedar forests of the middle Atlas.  We pass by Ifrane, a charming ski resort and Azrou, an important handicraft center specialized in the work of cedar wood.  We arrive in Midelt for lunch.  At the afternoon we will drive to Erfoud and into the desert.  You will have a camel trek into the beautiful Erg Chebbi Dunes, where you will spend the evening in a bivouac (camp).  There you will enjoy a Berber dinner, and sleep in traditional Nomad camel hair tent.