On last full day in Kauai, I really wanted to go snorkeling again, so we drove back out to Koloa (all hour twenty minutes) and went snorkeling at the same spot again. I was really excited because we saw turtles again!!! Two of them! And then we also saw these creatures: black durgon, moorish idol, yellow tang, trumpetfish, surgeon tang, surgeonfish, pencil sea urchin, and at one point, I looked up and right at the surface, I saw needlefish. We left after maybe an hour because we had to get back for Martin to watch the Miami vs. Notre Dame game.

As we drove back across the island, we drove out of the sun, into rainy weather. I dropped Martin off at the hotel and then drove over to Kalypso’s for happy hour and had an obligatory-when-on-an-island pina colada. 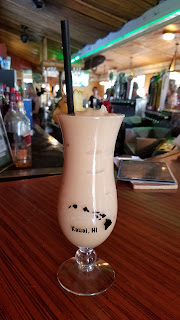 After that, I walked around the stores at Ching Young Village. Notttt a lot to see there. I went in the few stores there, including the grocery store, while the rain continued. After buying a few small gifts, and stretching my time there as much as possible, there was nothing left to see. So I drove further down the road to see the beaches around the bay and stopped at Hanalei Beach. I stood under the roof of the restrooms at the beach for a while, watching the rain, cold, and then decided to leave since the rain wasn’t giving up.

I drove back to the neighborhood our hotel was tucked away in, and decided I would go back to Queen’s Bath since I had really wanted to return to see it again and swim in the bath. This time, thanks to our kayak/hike experience, I noticed a pile of walking sticks off to the side at the top of the trail. Good thing, because it had been raining all day, and was still raining, so the trail was as muddy as mud can be.

There were two or three cars left up at the top of the trail so I hoped that meant there were other people at the bottom since I was going by myself.

Sure enough, once I got down, there were two couples there, one at the bath where people swim, and one farther down. I sat and watched the bath for a while, really wanting to get in but knowing I couldn’t.. just wasn’t a good idea by myself. The girl who was there carefully climbed down and went for a swim. She had her boyfriend watching for any big waves so he could warn her to get out. Then once she was done, he waited for a big wave and jumped in.. hah. He asked a few times if I was going to get in but I told him no. I wanted to so bad.

I snapped pictures like crazy on my phone while watching the sunset and feeling rain start to come down again. I had one favorite picture I’d ever taken up until this moment… I think this one tied. It was so, so beautiful, fierce, and lonely. 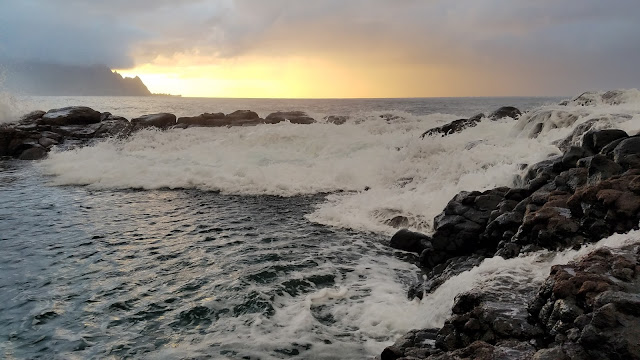 Once the rain started coming down harder and light was quickly fading, I decided I needed to quickly make my way back up to the car before it was too dark to see, and before I was the last one left. When I got back to the hotel, I went straight down to the pool and sat in the hot tub for a while, then went to the room and got ready for dinner.
While we were at dinner, we arranged to have a butler pack our bags since it was one of their services that came with the room. When we returned they were all packed for our departure the next day and they had decorated. 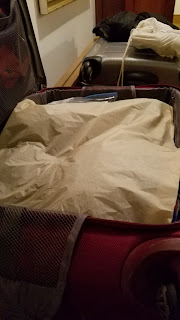 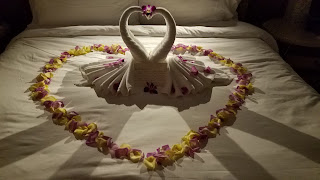 On Sunday morning we went down to the beach and pool for a bit, then headed out for the airport. When we were almost to the airport, we went back by Konohiki Seafoods and I bought an ahi poke bowl and scallop don to take on our flight to LA. After a long security line at the airport and slight delay due to plane troubles, we were off. We landed in LA sometime around midnight and Ubered to Martin’s cousin Pat’s house. 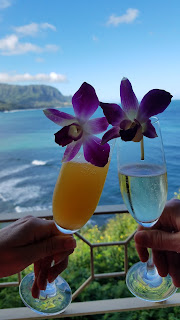 The next morning, I worked remotely until Martin’s cousin drove us back to the airport for our flight to Dallas, then picked up working again when we settled after security. We arrived in Dallas around 3 and Ubered home so Martin could grab a bag, then got in my car and I drove him back to Love Field so he could leave for New York.