Lecture wasn’t too great.  I thought I was off the hook for a while when she started off class by having me count to 10 in French.  Wrong.  Right after teaching us numbers 20-100, she had me count maybe 20-25 and my brain stopped functioning.  And being called on didn’t stop there. I hate reading out loud, always have, it just makes me nervous.  I thought that reading scripture out loud in Sunday school was bad with the things I couldn’t pronounce….. how ’bout reading a whole paragraph of French to my professor in front of the class on our third day?  Yeah.  Awful!!  Each day she reads a conversation that we’ve gone over, and we have to write it.  Well today after we wrote it, I had to read it aloud and say “period,” “comma,” or “question mark” in French when appropriate, and do all of that slowly so she could write what I was saying on the board.  Painful.

This afternoon CEA had an introduction to oenology (wines) lecture and tasting that we could attend from 5:30-6 (that’s one of the two classes that is being taught by CEA semester, the French classes are taught at the Sorbonne).  It was really interesting and made me wish I were in the class!  I wasn’t very good at smelling the wine and naming the scents, but I was surprised that I could tell the difference in the taste as we let it breathe and the flavors developed.

Once that was finished, I walked over to the Pompidou Center which is a big, crazy looking building just a few blocks from CEA.  Since it was pretty late, I didn’t get a ticket to go into the exhibits, but explored what I could in the building.  I really liked the way they did the back side of the elevator shaft!  They had a picture of a woman covering it, and the image of the eyelid was on the back of the car so when it moved off of the upper floor, it revealed the open eye image! 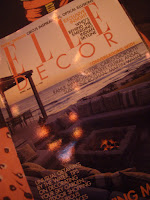 Not quite sure what I found, if it was part of the museum or another aspect of the building, but on the bottom floor there was a room that was decked out in Indian decor with a jukebox playing Indian music, and Indian publications.  I sat for a while and looked some of the publications.  I was really surprised to find that almost all of them were in English, and that there is an Indian version of Elle Decor!  I found one publication that I really liked, Motherland.  It was small with very few ads and lots of photographs. 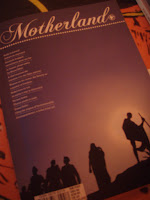 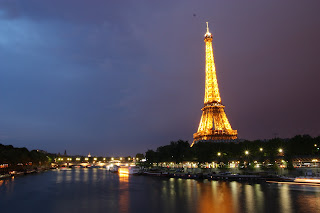 Speaking of photographs, I went out two nights ago and took pictures of the Eiffel Tower.  Didn’t get what I wanted, but I’ll keep trying.  There was actually a storm that night (and another one last night) with lightning so once I got there and realized it, I got my hopes up wanting a shot with lightning behind the Eiffel Tower, or honestly a shot of lightning anywhere!  Didn’t happen though.  Oh well!