Well it took 12 days but today my Blogger account noticed that I’m in France and changed all of the buttons to French.  Had to use a translator to figure out how to get to my blog to make a new post!  Hah.

On the first Sunday of each month, all of the museums in Paris are free (excluding special exhibits in some museums), so Teresa, Jennifer and I went to the Louvre museum.  We got there about ten minutes after it opened and there was a big line to get in, but thankfully it moved pretty fast.  The Louvre is HUGE!

We went straight to the Mona Lisa hoping that the crowd would be at its smallest for the day right then.  As you can see in the pictures, there was still a pretty good crowd for being so close to the opening time, but it wasn’t too bad. 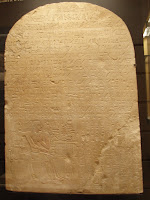 I enjoyed getting to see the Egyptian relics that were on display.  I’ve always wanted to go to Egypt; it sounds like a fascinating place.  I couldn’t believe how perfectly the hieroglyphics were carved into the stone.  I can’t even carve my initials into wood!

All of the Egyptian artifacts made me think of how I wanted to be an archaeologist when I was in kindergarten (Jurassic park came out and I saw it with my parents.. loved… love it!).  I thought it would be an awesome job getting to dig up and clean dinosaurs and Egyptian stuff using the little brushes and whatnot.

Unfortunately, my passion for archaeology ended around the second grade when I watched a group of archaeologists dig up a corpse on PBS.  I just wasn’t up for that.  I don’t think I found another career that I wanted to pursue for a LONG time after that.  Still kind of sad about it.

The later the day got, the longer the line outside became!  Every now and then I’d go over to a window to see.

While I was in DC in 2009, I went to the Smithsonian museums and discovered that I really loved marble statues.  They’re amazing.  I spent a lot of my time in the Louvre looking at all of the marble statues that I could find.

If you come to Paris and don’t have a day to spend at Versailles, Napoleon’s quarters in the Louvre are very similar (ultra-extravagant decor) but not as time consuming.

After five hours in the Louvre, I really needed to get outside and get some lunch other than the apple that I had brought along, so I left and took a walk through the Jardin des Tuileries, the gardens adjoining the Louvre.

Once I sat for a while and got some lunch, I walked over to the Musée de l’Orangerie, a museum that has Monet and Renoir paintings among others.  It was really nice to go there after the Louvre because it was a very small museum.  There some really cool, HUGE Monet paintings which were fun to see after going to his home in Giverny last week.  After that I walked to the metro and on the way passed the Luxor Obelisk, a gift from Egypt to France, and happened across yet another beautiful old church.  When I went in they were having a choir concert so I stayed for that.  It sounded great echoing through the huge building.