Today I took a bus tour to Stonehenge and Bath.

Stonehenge was neat to see, pretty amazing.  I’m glad I can say I’ve seen it now! 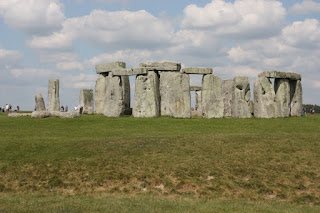 When we got to Bath, my new friend from the bus, Emerson (he’s doing a study abroad in London for the summer), and I got lunch.  We each had a “large traditional pasty” as recommended by our tour guide.  It was “chuck steak, Cornish potatoes, swede, onion, and seasoning crimped in a flaky pastry.”  It would have been good if I hadn’t burned my tongue on it the entire time I sat eating it!

From there, we went to the Roman Baths.  So cool!  It made me think again about how I wanted to be an archaeologist when I was little; definitely something that I still think would be awesome!  There’s just SO MUCH stuff to be found, it’s crazy.  The Baths had been buried and forgotten for years as other things were built on top, but then were uncovered again.  Mythology, archaeology, medieval times=some of my favorites!

It was so interesting, in some of the rooms, the Romans stacked these tiles spaced apart and then put the floor on top of them so there was space to push heat under the floor to warm it.  It got so warm that had to wear wooden shoes to not burn their feet!

The baths also had a museum inside that showed all the parts of the complex that had been destroyed, like a temple to the goddess of the spring that filled the pools. They had these little pieces of (if I remember correctly,) very thinly-pounded lead that people would etch curses into if someone had stolen from them! They would then roll up the lead into a little scroll, and throw it into the pool for the goddess to take care of!

I was nearing the exit of the bath house when this random guy approached me.  He asked if I was English and then started repeating that I was gorgeous and asking if he could take my picture and in my confusion about what the heck was going on I said “Uh..OK.”  THEN he continues on saying that he had “been following” me around the bath house and asked if I was alone!!!!  YIKES!  I said “No, I’m here with a group,” really feeling like I made it up although I suppose it actually was true.  He said, “Oh.  You didn’t you like you were with anyone going through the bath house.”  CREEPY!  Me: “I was with a friend but I think he’s looking at something still,” again feeling like I was just giving an automatic answer but it was actually true too.  Truly, I was so confused about what the heck was going on, it was so weird.

So then he wanted to take the picture OUTSIDE, and for some reason in my confused stupor I FOLLOWED him.  He snapped a photo of me looking dazed outside with his phone and then we walked away.  All the sudden I snapped out of my stupor and was like “That’s it!  He just pick pocketed me!  That’s what that was!” almost relieved to figure out the reason for the creepiness, but I looked down at my bag and it was overly securely fastened as always, zipped shut and then with a clip on the zippers and tucked away, and my camera was still there.  It was creepy.  And when I looked back, he was standing with at least two other guys at the other corner of the building.  Needless to say, I was looking over my shoulder every five seconds and hoping to find Emerson until I DID find him 20 minutes later.  It was just so creepy and is still bothering me.  All I could figure is either I was going to be abducted if I confirmed that I was alone or it was some weirdo social experiment.  Either way, I was definitely bothered by how absolutely instantly off-guard the weirdness had knocked me!  It would have been the most perfect time to pickpocket me if I’d left anything open!

Anyway.  After I found Emerson, we looked at some AWESOME nature photos that were on display around Bath Abbey (we couldn’t go in because there was a wedding), then got back on the bus and rode two and a half hours to London.

When the bus dropped me off, I started walking back to the hostel.  On my way, I passed the Museum of Natural History (it was closing so I didn’t go in) and Harrods!  I went into Harrods since it was open.  Woah.  I’m really glad I went in, it was crazy!  I officially touched a Versace dress.  And found these AWESOME shoes that are covered in crystals.  They were something like 2,300 pounds ($3,682)!  A few minutes later, I touched another shoe that was on a little stand and it FELL!  Just less than a foot, but it was an 876 pound ($1,402) shoe, so for a second there I was worried (foot-distance, pound-currency, confusing sentence!).  It was a lot of fun to wander around that store, and interesting to see the people.

I think I forgot to write that when Teresa and I went to Lauduree, we also built up our courage and walked into the Gucci, Dior and Channel stores in the area.  Woah!  Very cool.  And very intense.  The store people follow you around.  Yeesh.  In Gucci, I saw a woman walk up to the counter to purchase something so I quickly told Teresa to listen closely so we could see what her total was.  She was holding a bikini top and MAYBE one other small clothing item.  One-thousand something euros (which would be about $1,400).  Crazy.