The city we’re now in is Varanasi, and it is considered to be the spiritual capital of India. We’re no longer in Rajasthan and are now in the state of Uttar Pradesh.

This morning we woke up at 5:30 am to go watch the sun rise from a small boat on the Ganges (Ganga) River. While on our way to the river, our guide told us this city has had three names throughout the ages, Kashi, Benaras, and then Varanasi. The city has 87 ghats, or sets of stairsteps that lead down to the water. The majority of the ghats are used for daily bathing, swimming or religions ceremonies, but a few are reserved for Hindu cremations. Hindus believe that when someone is cremated and their ashes are put into the Ganges in this city, their soul will go to heaven and finally escape rebirth. There are stacks and stacks of wood by the ghats for cremation, and we were told they use the weight of the body times two to determine the weight of wood used for each cremation. It is estimated that 100,000 bodies are deposited in the Ganges each year, but not all are fully cremated, or sometimes cremated at all as not all families have the money to purchase the wood.

As we climbed into our rickety-floored boat, our guide purchased two small bowls made from leaves filled with marigold and rose petals, and a wick (lamp). A ways into our trip being rowed upstream, he carefully lit the wick of each and then gave them to us to make a wish, and place into the river.

In addition to the locals bathing and swimming, religious ceremonies, and cremations, we also saw a number of people washing things in the river. They would dunk fabric in the water, swing it out from behind and over their shoulder to slam it on the steps or rock that were sticking out. Once finished, they would lay them on the steps of the ghat to dry. I asked our guide if they were just washing for their families and he told us no, many of them have a laundry business. We also saw many monkeys running the buildings, jumping from one to the next.

Amazingly… there were water peddlers! Just when you think you’ve found a way to get away from them.

When we got out of the boat, we walked into the narrow streets of the city and did our best to avoid countless spots with animal diarrhea.. not sure what’s different in the diet for animals here, but it was a mess. Everywhere we turned along our walk, there was a temple.

From there, we were taken back to the hotel for a quick breakfast. Weird.. when we walked in, the hostess told us, “you look like dolls.” Anyway.. after breakfast, were taken on a drive by Banaras Hindu University, the school where our guide studied tourism management until 2009. We stopped to visit a couple of Hindu temples, and concluded our temple visits with one to Mother India Temple (Bharat Mata Mandir). This temple has a huge map of India on the floor and our guide showed us the different cities we’ve visited and several other things.

For our next stop, we drove to the neighboring northeast city of Sarnath. Sarnath is considered to be the birthplace of Buddhism, where Buddha gave his first sermon. There we saw an eighty-foot tall statue of Buddha, one foot representing each year of his life and a Buddhist temple where we were able to go in a small room at the back, but not the main area as there was a service going on.

After the temple, we handed our bags and cameras over to be put into a locker, and then walked through the Sarnath Archaeological Museum with our guide. Once we retrieved our items, we walked through the ruins where the artifacts in the museum had been found, then drove to another Buddhist temple where we were able to go inside. I’d seen statues like this before, but never realized it was Buddha.

When we were in the car, we kept passing groups of men wearing orange hats with flags, crammed into backs of trucks and on mopeds, who were cheering and making a lot of noise. We’d passed something similar in another city.. our guide told us it was some sort of political thing.. still not clear on it. 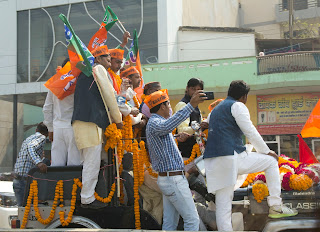 I’d bought a book of postcards while in Agra, so we stopped by a post office to get stamps and mail them. Each card required 15 rupees ($0.22) to send. I had read that mail should be given directly to the post office instead of placed in mailboxes, as the mailboxes are frequently broken into and not canceled stamps, stolen. After the post office, we stopped by a store that helps people without enough income receive glasses. 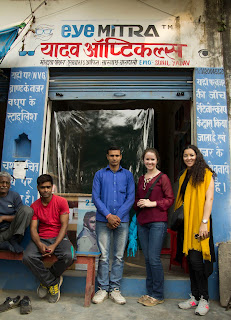 Our final stop was at a silk store. We were taken downstairs to see three men, each sitting in their own recessed area, working on the loom. There were punch cards that laid out the design for the piece and would determine which threads came forward for the weaving. Some of the more intricate pieces can take a year or longer to complete! Afterward we went upstairs for the usual (in many countries) show, of tons of items and pressure to buy.

Tonight Hajar went to see a ceremony called Ganga Aarti back at the river. I was so tempted to go but woke up this morning with a sore throat that quickly progressed to aching all over. With a flight to Delhi tomorrow at 8 am for our final day in India before flying out at 3 am the next morning (no hotel, just keeping our bags in the car all day), I figured I shouldn’t make myself worse. Tomorrow will be rough enough lack-of-sleep-wise without being sick. When she returned, she said they passed probably four weddings along the way. Sure enough, as I’m writing this, there’s some sort of parade in the streets outside of our hotel right now for a wedding. Lots and LOTS of noise, lights, and fireworks going off… causing a lot of traffic!