On our last day in India, we had an 8 am flight to Delhi. This time, I didn’t really get patted down.. hooray! I opened my locket since the last one had me do it.. this time the girl just commented that there were “no pictures” in my locket.

After meeting our driver, we went to Bengali Sweets so Hajar could buy something to take back to her office. Then we went into several sari and jewelry stores around the area. We saw dresses that were incredibly detailed and priced in the tens of thousands of rupees. In one jewelry store, we tried on some gold bangles and were shocked to then be told for a set of six, the cost was about $2,000!

From there, we went to Dilli Haat, a fun crafts market in New Delhi. We had a great lunch at the West Bengal Foods Stall in the market. Hajar had fish that was wrapped in some sort of leaf (bhetki paturi) and coke masala, and in spite of my sickness making me not hungry at all… I tried something called chicken korma. I ended up haggling for a red scarf for my grandmother. After some back and forth, I left the store and when I as maybe ten feet away, they came running after me to accept my price.

We were caught off guard when one of the vendors said, “how you doin'” to us, sounding just like Joey from friends. He asked where I was from and when I said Texas, he tried to modify it to “how y’all doin'” but it still sounded like Joey.. hah! I also haggled with someone, trying to get a really cool leather-bound notebook for my nephew, but unfortunately, that didn’t work out and I didn’t end up getting it. 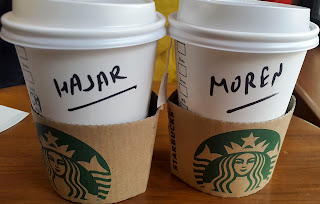 After several hours of wandering at Dilli Haat, we left for Hauz Khas. It turned out this area didn’t have as many vendors or stores to look at as we had hoped, so we walked into a Starbucks to have some tea and get some much-needed antioxidants. Sitting in the Starbucks, we wouldn’t have known we were in another country. It was exactly like one in the US.. they even still had Christmas tree gift cards for sale up front. While sitting by a window, visiting, a guy walked up to us with an espresso, and asked if he could sit down next to me. I said yes, and Hajar looked at me funny. A few minutes later, I turned around and realized the whole store was empty. I fully assumed the seats behind me were taken! He seemed to constantly be waiting for an opportunity to join our conversation, and sure enough after a few minutes asked where I was from. I answered, then returned to the conversation with Hajar. I even said how “our husbands” would have a lot of fun at the place where we’d gone earlier that day.. hoping he’d leave us alone then. Also talked about my sickness and how I hoped I wasn’t contagious… and coughed a lot. Nope! Maybe thirty minutes into sitting next to me, STILL somehow drinking a tiny espresso, he asked, “what do you do?” I thought for a second and figured if I answered, “marketing,” it would only continue with the questions. So I just blurted, “I’m married,” (I’m not). Hah! That stopped him.. yet he still sat for another ten to fifteen minutes while Hajar and I tried to nonstop talk and avoid more awkwardness. Finally, he left.

Our final event in India was a pre-wedding celebration our coworker invited us to for her nephew. It was supposed to only take an hour to get there but our driver got lost and it ended up taking forty minutes. After asking five different men for directions, he finally got us there! We had tried to use Google Maps but it failed us and took us to the wrong place.

The house looked so beautiful when we arrived, with lights hung from the roof all the way down and colors and flowers everywhere. We both got henna done, Hajar on her wrist and me on the front and back of my right hand. We sat in a room with all the women and listened to them singing for a bit, then had to leave for the airport. We had planned to leave at 9:15 but ended up leaving closer to 10.

From there, we headed back to the airport where Hajar caught a flight to Paris a 1 am and I caught my first flight, to London at 3 am.