After a flight to LA on Friday and a morning flight from LA on Saturday, we arrived in Kauai, Hawaii for our honeymoon–yahoo! A couple from my family, Bruce Wayne and Annetta were on our flight so we chatted with them a bit after landing and learned they were renting a car. After being in Belize last year where there were no cars, renting a car hadn’t even crossed our minds. We ended up renting one.. a red Mustang. Mustangs and Jeeps are, by far, the most common rental cars here.

On our way to our hotel on the North side of the island, we stopped at Taco Bell for a quick snack, then I spotted Watever’s Thrift Store and we had to stop. I found a boogie board for $2.50 and then we continued on with our hour drive to the hotel. 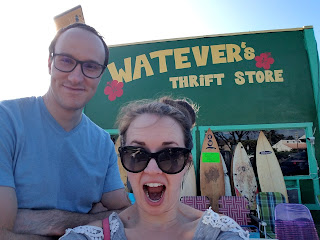 When we arrived at the hotel, they presented us each with a Kukui Nut lei, black for Martin and white for me, then we headed up to our room. What a beau-ti-ful view!!!

After enjoying the view for a bit, we headed up the road to Hanalei Bay Pizzeria for dinner and had
garlic knots and a pizza that was half meat with sriracha sauce and half goat cheese and honey… the goat cheese size was amazing!

On Sunday we woke up to see rain hitting the bay. I kid you not, before we left the room for breakfast I think we saw something like six rainbows appear and disappear! Even when dreary.. the place finds a way to be beautiful! I researched the amenities of our hotel and learned that they will unpack/pack for you… so I convinced Martin we had to arrange for that!

After having a wonderful breakfast overlooking the beautiful mountains and water, we headed down to check out the pool and beach, and then hopped in the car to see my first ever waterfall. We drove to Wailua Falls where you park and can see waterfalls. Then we drove a few minutes over to Opaeka’a Falls, another waterfall, visible without a hike. That area also had a beautiful view of the Wailua River. When we were heading back down after those sights, we saw a sign for a State Park, so we pulled over and followed the path next to the sign, up a hill. When we got to the top of the hill, we found ourselves in a Japanese cemetery… so much for the state park! We then headed over to Konohiki Seafoods to grab some lunch. There wasn’t anywhere to sit and eat, so we bought the Chirashi, which had rice, scallops, ahi, salmon, hamachi (Pacific Yellowtail) and roe (which I would describe as orange caviar) and drove over to the beach, parked, and ate it while sitting on the back of the car.

From there we headed back to the hotel, and at 3:30, we went down to the hotel bar for a sabering lesson. A man talked with us about the history of the hotel and its founder, and then taught us the steps to safely saber a bottle of champagne. Martin even got to try it! He said you can take mostly any blunt object and use it and the pressure within the bottle to knock the top part of the glass off.

After we were done with the sabering lesson, we headed down to the beach and walked along the shore. I was happy to see there was sand all along the shore, I had been afraid it would be all rocks. For dinner, we headed back into Hanalei to get Hawaiian grilled cheese sandwiches at Pink’s Creamery, only to find they stopped serving them 15 minutes before we arrived. So we switched plans and went across the street to Hanalei Gourmet, another well-rated (Yelp) restaurant that was situated in an old schoolhouse. We weren’t crazy about our dinner. We had artichoke toast and Martin got a bad piece of garlic, then we had Mac Nut Fried Chicken which we weren’t crazy about. When we were done, we headed back over to Pink’s for some ice cream. 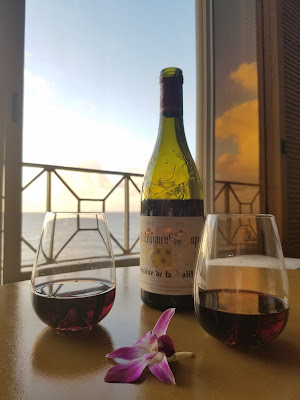 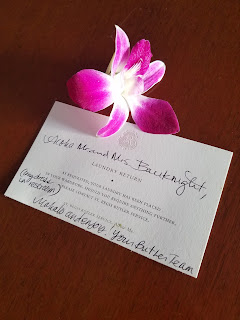