The next morning, we woke up and went to breakfast with Hajar’s dad and Rachid at Ftour Beldi.  Our waiter was hilarious and kept calling me “blonde baby” the whole time we were there.  After that we headed out for a day trip in Essaouira, a seaside town about 2.5 hours away. 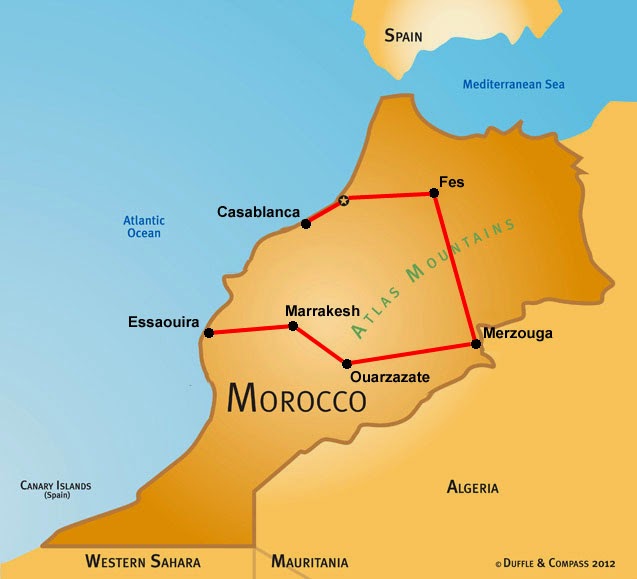 A few miles outside of town, we stopped at a spot that had a good view of the town. 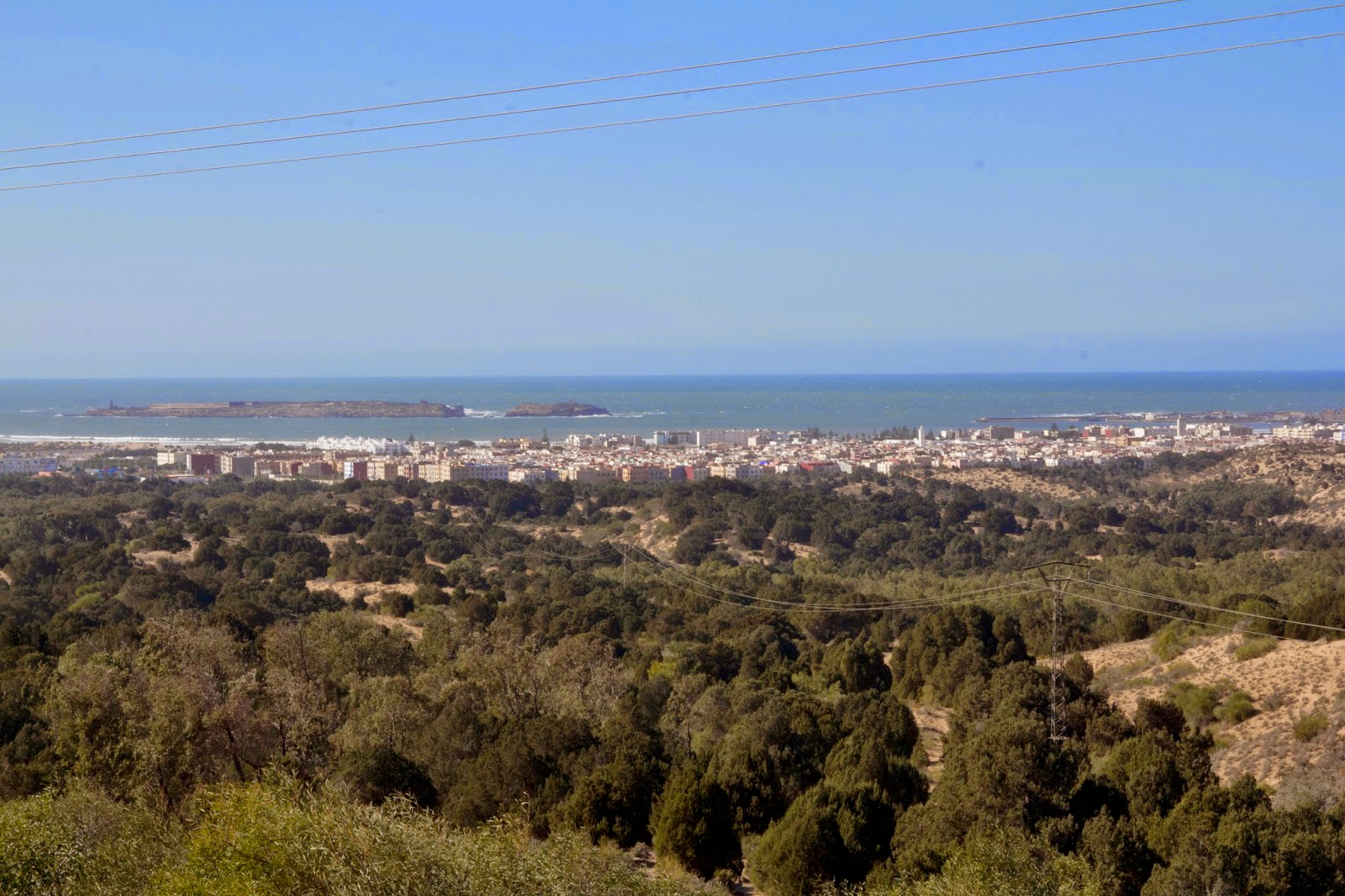 When we got into town, we parked and walked into the Medina.  Similar to Fes, it was made of alley-like walkways and you didn’t see cars there.  Most of the buildings were white with details painted blue.  So pretty!  We wandered around for a while.. I kept going into the jewelry stores to look at their silver bracelets and amber rings. 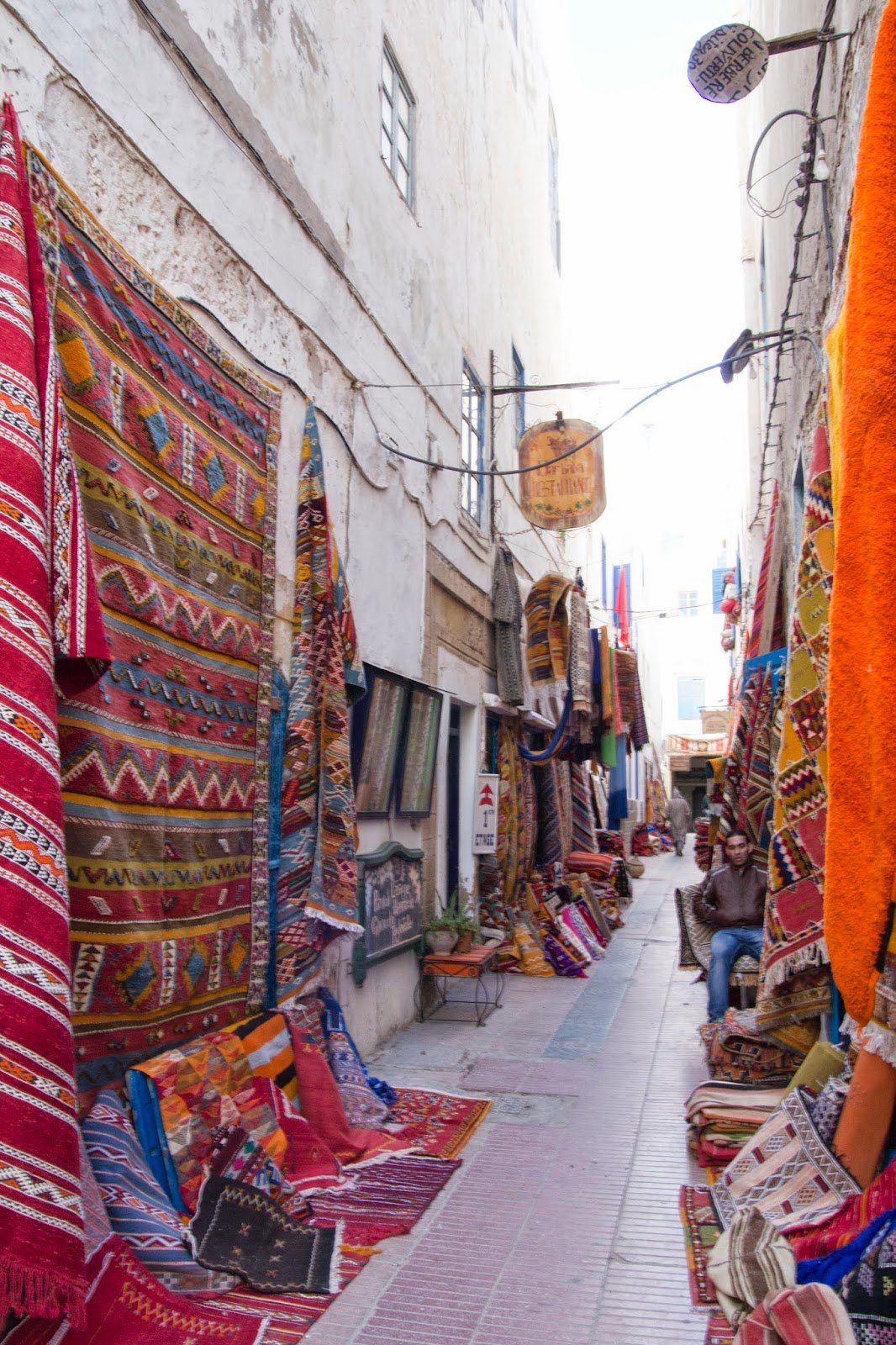 Eventually we came to the beach.. a very rocky, windy and chilly one!  It was time for lunch, so we looked at a long row of vendors that were selling unprepared seafood that you could take to a restaurant nearby to have prepared.. I probably couldn’t name half of what we saw for sale. 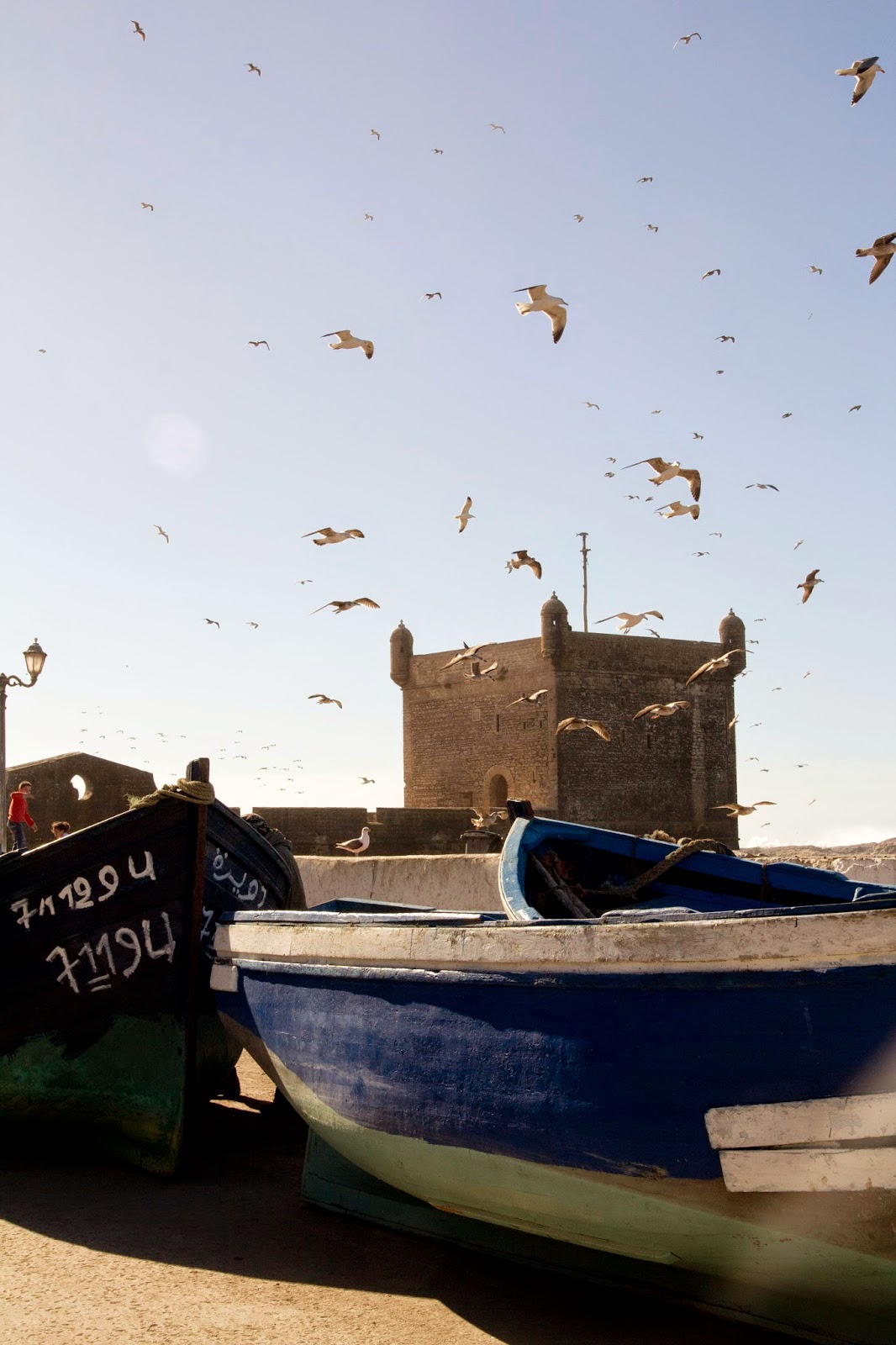 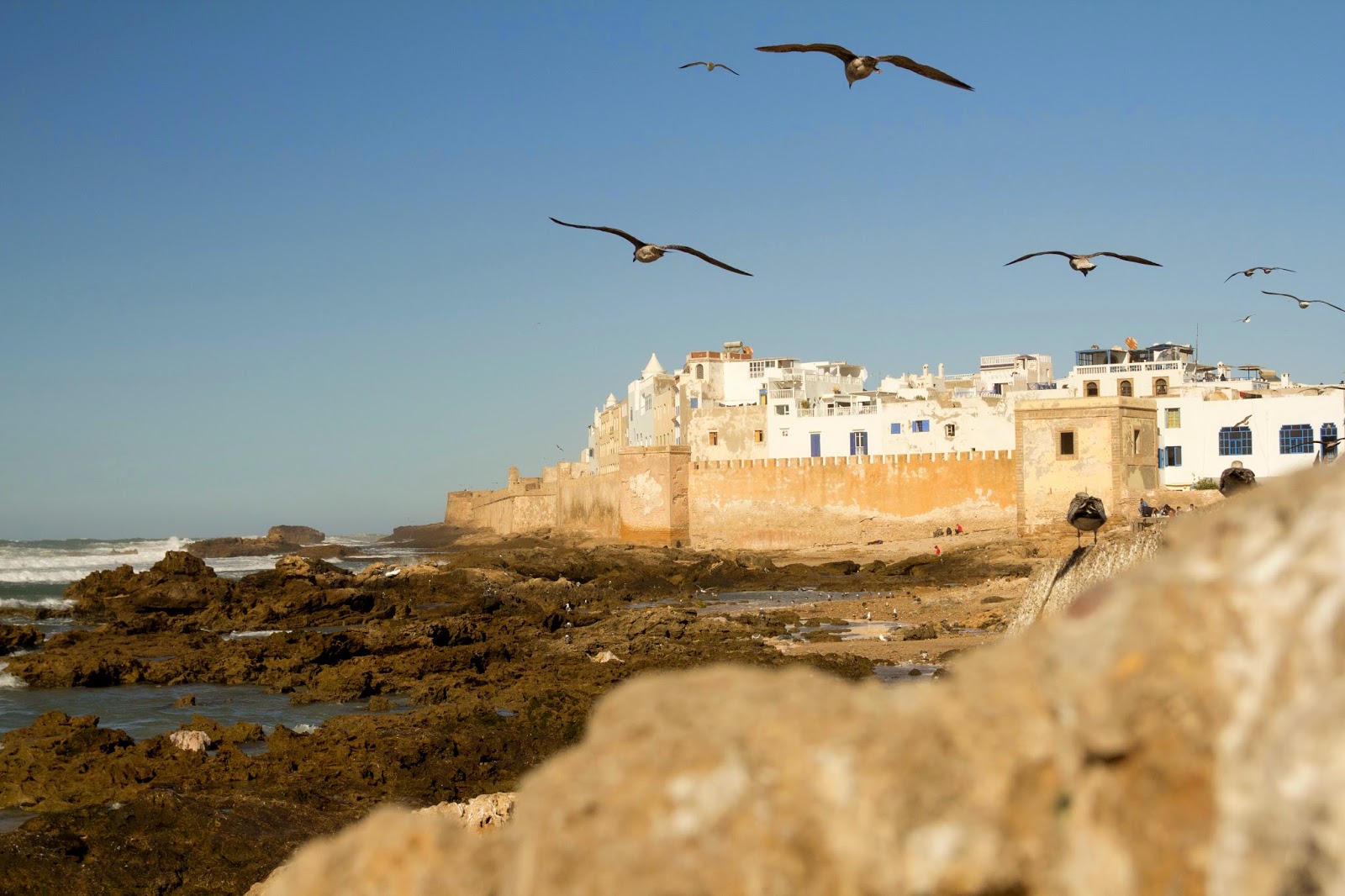 The guys didn’t think the vendors had fresh enough seafood, so they led us back into the Medina into a tucked away market area that sold seafood to their liking.  If I didn’t know what half the stuff was on the beach, the MAJORITY of the stuff in this area was unidentified.. and totally fascinating!

Hajar’s dad and brother chose a wide selection of seafood for us and took it to a restaurant inside of the market and found a table.  After a bit of time, they brought our food (and there was a LOT) out to us.  We ate for what seemed like hours!  We had fries, tomato salad and some of the seafood we had was grilled shrimp, squid and grilled seabass.

After lunch we continued to explore the Medina, walking through a plaza filled with kids playing soccer, until we all wanted a break to sit down, still full from lunch.  We went onto the terrace of Riad Nakhla for a view and to sit, relax and even nap for a few minutes.

When we were done resting, we got up and ended up going to the car.  At this point it was just Hajar, her dad and me, Rachid had gone somewhere while we were on the terrace.  After a bit of sitting in the car, Rachid turned up and had a box with him that he’d bought.  He passed it to Hajar and asked her if she remembered how to open it.  Sure enough, she did. She called it a puzzle box.  I thought it was SO cool and was wishing I’d bought one and then he said it was a gift to me!  Yahoo!!  Adore it! 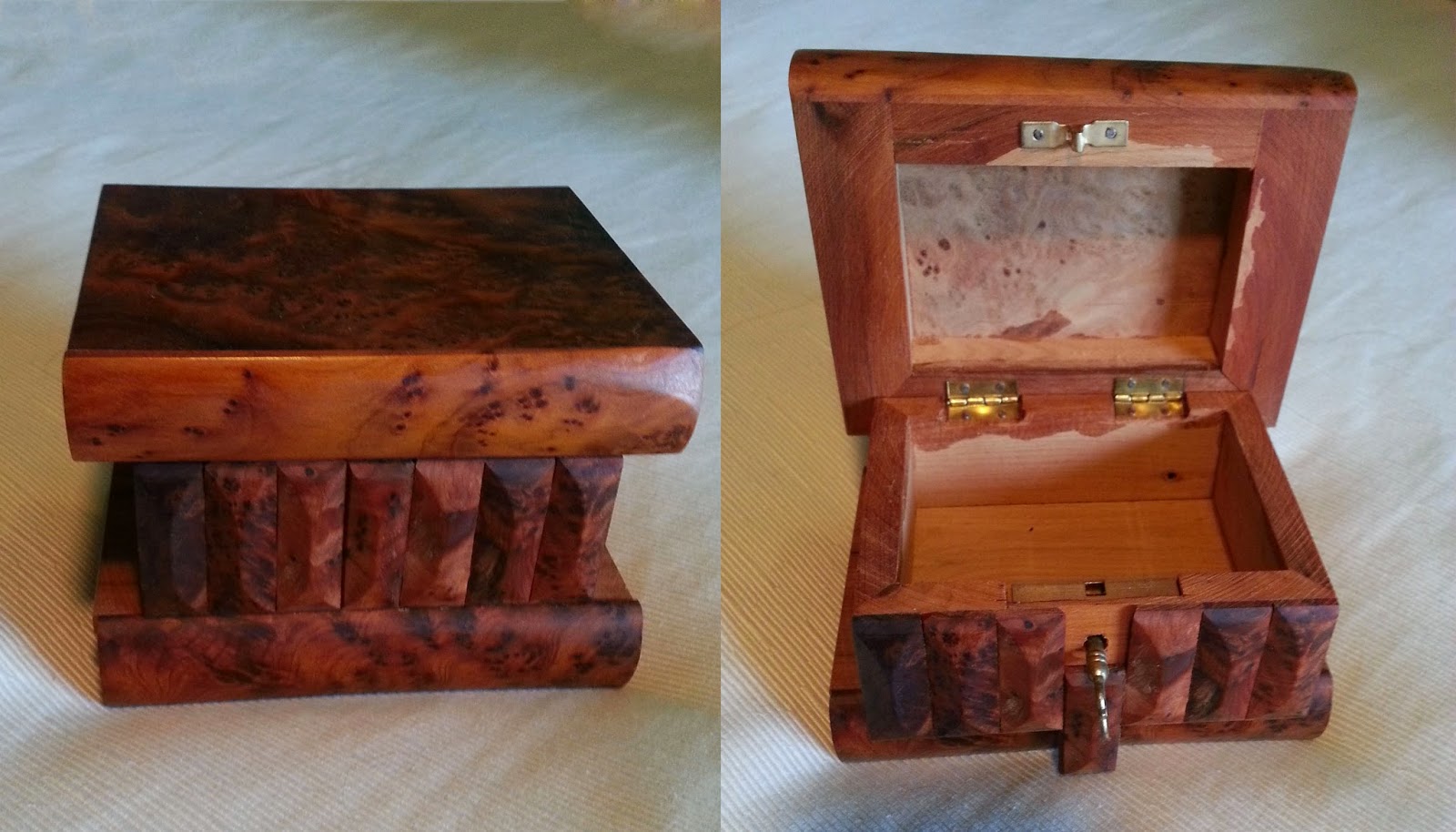 All together again in the car, we headed back to Marrakesh for dinner at the hotel.  The next day would be the last of my trip to Morocco.