This morning we headed to Amer Fort, a fort up on top of a hill. After waiting in line for maybe fifteen minutes, we walked up some stairs and sat down on the back of an elephant with a painted face to be taken up the hill. As soon as we got on, our guide took a picture, and then some guys off to the side yelled to get our attention so they could take a picture. After taking the picture, the guy yelled, “Remember me, my name Giorgio Armani,” pointing to the top of the hill.  Haha!

True to the pictures I’d always seen of the country, the elephant’s face was covered in brightly colored designs. Hajar gave her phone to our guide to take a picture and during the trip up the hill, also handed it to the man directing the elephant behind us to take a picture. I still can’t get over the colors and designs.. so beautiful! Once we got to the top, we found another person to take a picture of us from the ground, then got off and headed up to see the fort. 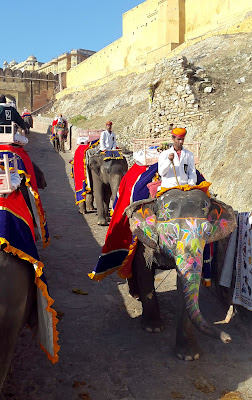 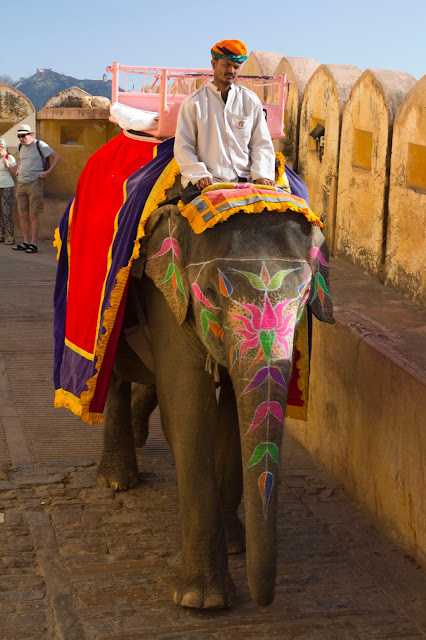 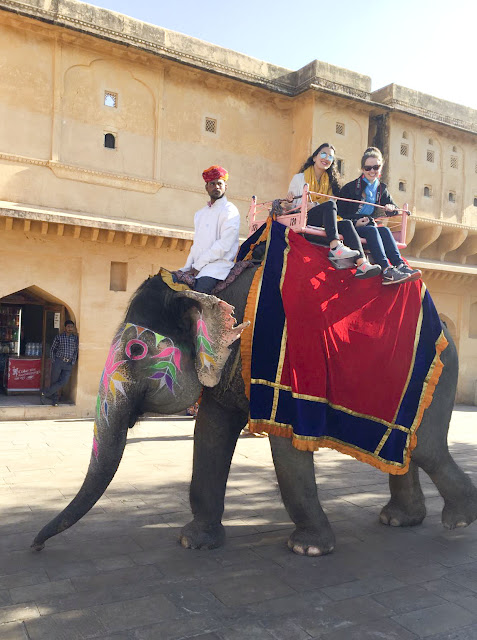 The fort had an amazing Mirror Palace where our guide told us the royalty would hang different colored curtains to change the color of the room.

One thing I haven’t mentioned yet is the peddlers…. They’re everywhere! Up until today, they only spoke English to us. They’ve been around most places we’ve gone, peddling all sorts of little souvenirs that our guides and driver tell us will fall apart. Before leaving the fort, our guide warned us that a guy would walk up with pictures he had taken of us on the elephant and at first try to charge one amount, then if we kept walking would eventually get down to 100 rupees and follow us to the bottom of the hill. Sure enough, as soon as we walked out, our friend “Giorgio Armani” appeared and started giving me prices just as the guide promised. The funny thing is that he was speaking to me in Spanish! He quickly went down to 200 rupees (in Spanish), then stopped following when we stepped out of the gates. We hoped he would reappear as we wanted to buy the pictures, but unfortunately, he didn’t. Our guide said he must have had good business that day so he didn’t need to follow us.

When we got to the bottom of the hill (you can only ride elephants up, too hard for them to carry people down), we had a beautiful view of the fort and of a saffron garden in the middle of a manmade lake. 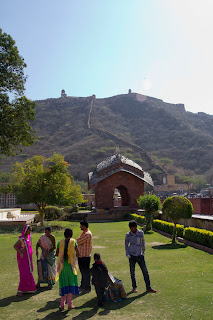 From there we drove Wind Palace, a Jaipur pink building in the city, and took pictures from the road.

Our next and final stop of the day was City Palace. The doorways in one of the areas were amazing, some in beautiful green, others adorned with peacock figures. They were setting up red carpet and flowers for a wedding that night. Our guide told us that to rent that area and decorate, it would be about one million rupees ($15,000). After looking around the palace, we walked through a museum that showed clothing and weapons of the time, and saw the room where the royal family still holds functions today. 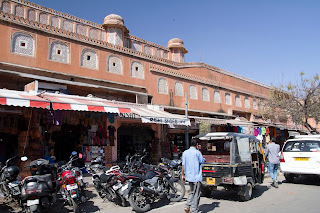 From the City Palace, our guide took us to a shop where they make textiles and rugs. They gave us a demo of block printing on fabric and of weaving and finishing carpet.  They would burn the back of finished carpets to finish them, it made the grip seem better.
We decided to go to dinner at a place about 40 minutes away, so there were plenty of sights along the drive. 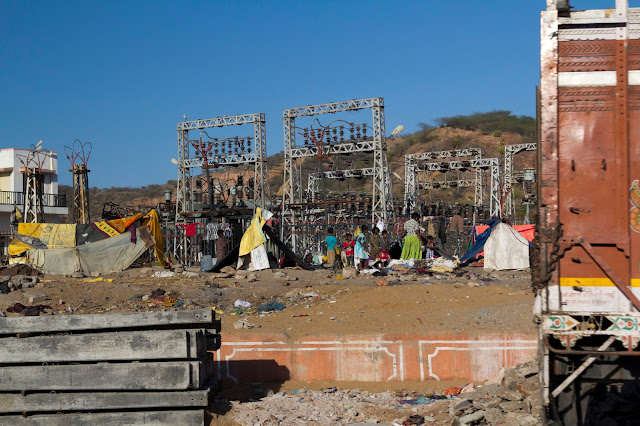 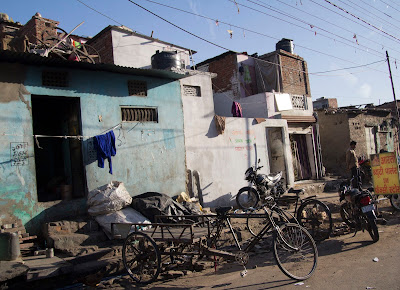 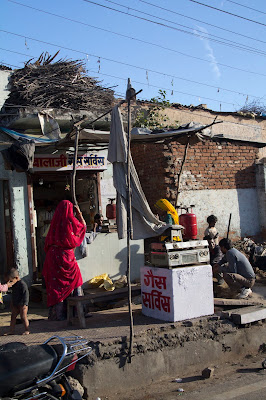 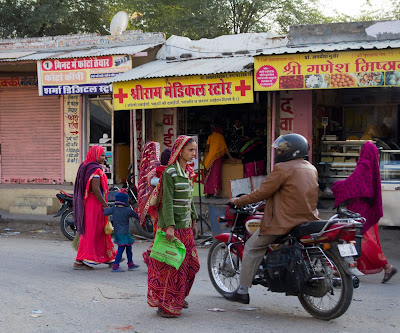 For dinner, we went to a place a lady on my second flight had recommended, and that our friend Avanti recommended called Chokhi Dhani. It’s somewhere between a themed restaurant and amusement park and we loved it. We purchased traditional Rajastani dinner tickets (700 rupees, $9.70), then headed in. They had lots of areas where there were dancers, food vendors (10-20 rupees), midway-type games, stores, animal rides, a small man-operated ferris wheel, a village where they’d built houses representative of different Indian states and furnished them with typical furnishings, and more.

We finally got to try pani puri, something we’d once tried at a friend’s house in the US, and we had my FAVORITE snack that I always buy from the Indian grocery store at home, chana jor garam. The man mixed chana jor garam, some other snack food, onions, some lemon juice and something green.. maybe parsley and put it into a paper cone. OH MY GOSH. It was sooooo good. My friend Vidur has been telling me to do something similar with the chana jor garam at home. 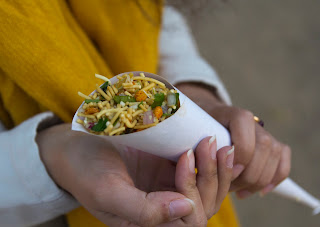 After grabbing those snacks, we continued exploring and went to a few stores where we both found some blousy (VERY comfortable) pants, Hajar’s black and blue with elephants and mine royal blue. Then we watched some dancers for a bit before heading over to dinner.

We had to take our shoes off before entering the building where we would have dinner, and when we walked in we sat down on cushions, raised maybe five inches from the floor to sit down at a table just slightly higher than our cushions. The food was like what we had at Rajdhani, but instead of being on a metal tray, it was on a plate and in bowls that were made of some sort of leaves.. very delicate. The food was great but boy was it hot! My water bottle was empty and we couldn’t drink the water they’d given us, so we had to go without! Similar to Mexico, tourists shouldn’t have the water here (or ice..easy to forget!). Thankfully, they gave something on the plate that looked and tasted a bit like brown sugar, so I’d use that to cool down a little when needed. It cracked me up, while downing the spicy food at one point Hajar said, “I can’t believe the white girl’s beating me!”

After eating we looked around a bit more, and some people asked to take a picture with us but we were thrilled because we finally got a picture with someone in a sari! 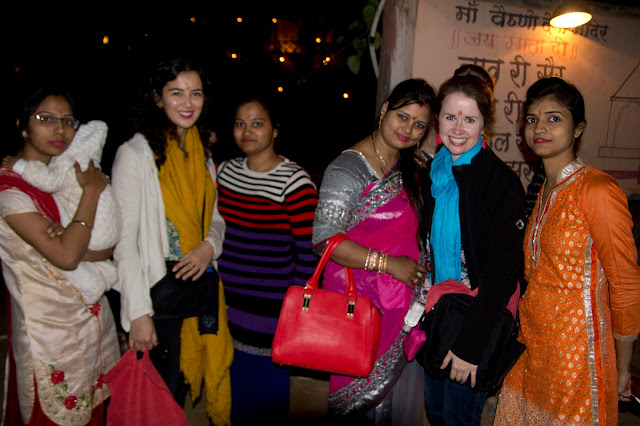 On the way back, I finally caught a video of what I’ve previously described about driving in India… see it here:

——————————–
6th Feb: Day 04: Jaipur
After breakfast proceed for full day city tour of Jaipur – visiting Amer Fort located at a distance of 11 kilometers from Jaipur and was the old fort of the Kachhwaha clan of Amber, which used to be the capital, till it was moved to Jaipur. The fort is built with white marble and red sandstone and looks even more attractive because of the Maota Lake in the foreground. The fort in itself is a beautiful sight to behold but as one looks on the fort with its clear reflection on the lake in the front; one cannot help but wonder if it is a dream or a beautiful illusion. An elephant  ride[Subject to availability/alternatively by jeep & cost will be borne by Fountainhead] will spare you the trouble of reaching up to the fortress. Once on top, stroll through the sprawling complex of courtyards and halls;
Later visit the City of Jaipur. Among the highlights to be seen while touring Jaipur include the City Palace, which is an overwhelming complex of exquisite palaces, gardens and courtyards, decorative art and carved doorways. The palace museum houses collections of rare manuscripts, armory, costumes, carpets and miniature paintings. Walk to the adjacent Jantar Mantar or Astronomical Observatory made by the Maharaja of Jaipur, built in 1726 and is one of the five such astronomical wonders built by Sawai Jai Singh and makes accurate predictions even to this day. You will also have the opportunity to wander about the local markets. Jaipur is a shopper’s paradise. Most of the bazaars are located in old city with wide range of things to buy, from jewelry (precious and semi-precious stones) to textiles to handicrafts and antique. No doubt for an avid shopper “Jaipur” is the choicest of the cities.
Rest of the day is free for Local Market.
Overnight at Jaipur.