Today we started off the day with tea, then headed down for breakfast. I tried a spiny looking fruit called rambutan and carambola (star fruit). Wasn’t a big fan of either, but they were interesting and really pretty. I also had POG juice (passion fruit+orange+guava)… so good!

After checking off my bucket list item “see a waterfall” yesterday, I decided I wanted to get IN a waterfall. So I researched and found a kayaking tour where you would hike to a waterfall, and we signed up for it for today. On our way across the island to the tour, we stopped by a thrift store in hope of finding water shoes. We lucked out and found water shoes, hats to wear while kayaking, and I found a mask and snorkel.. yahoo! Then we continued on with our 40-minute (23-mile) drive down to Rainbow Kayak Tours. When we arrived, they gave us a dry bag to load all of our things in, and we switched to some loaner tennis shoes. The trail is usually muddy, so a lot of tourists have left their shoes behind, so they let others wear them instead of getting their own shoes muddy. Then we loaded up in a van and drove over to where the Wailua river meets the ocean and got started paddling up the river.

It was a kind of dreary day but we felt OK about it since it meant we wouldn’t be totally sunburned. We kayaked maybe forty minutes up the river, veering to the right at a fork and going through some narrow areas with lots of branches and fallen tree trunks in the water. We actually got stuck on one but thankfully were able to get ourselves unstuck and continue on. Finally, we came to an area where a tree had fallen across the water, so we stopped, got out of our kayak (ours was named Tiny Bubbles), pulled it up onto the shore and began our hike. 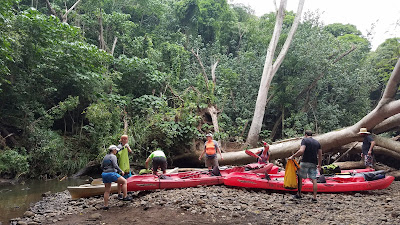 It was interesting to hike with our guide, he showed us a beehive in a tree, a plant called St. Thomas’ Bean, and the seeds from that plant that are used for jewelry and numerous other sights along the way.

The waterfall at Uluwehi Falls (Secret Falls) was beautiful, and the water VERY cold! The overcast sky didn’t help us feel warmer. I didn’t end up going UNDER the waterfall as I figured I might freeze to death, but Martin did. 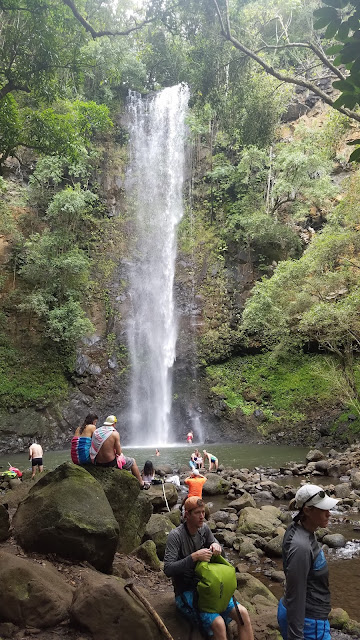 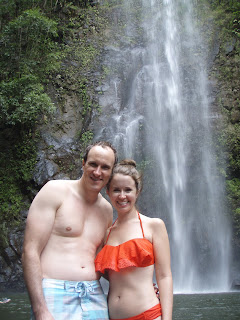 Once we were done checking out the water, we grabbed our lunch from our guide, a sandwich with meat and sprouts and then a side of pineapple, and took it over to a rock facing the waterfall and sat down to eat. He had a pretty cool way of cutting the pineapple.

After we finished eating, we had a few more minutes to take pictures, and then hiked back to our kayaks, and kayaked back to the van. 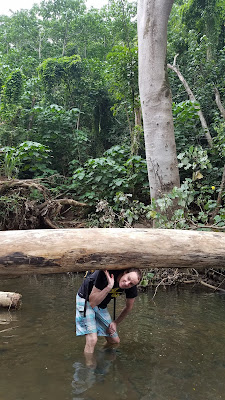 When we were back to the Rainbow Kayak Tours office, we emptied our bag, returned our shoes, then walked over to check out the beach for a few minutes. The sand was pretty course, somewhere between sand and gravel.. odd. Martin went pretty far out and unfortunately cut up his knee and ankle on some coral… good thing he was wearing his shoes so it wasn’t worse. We rinsed off and then drove back to the hotel to get ready for dinner.

For dinner, we tried out another place that was close to us on the north end of the island and well rated, The Dolphin. I finally had sushi, and Martin tried fish and chips.