On Monday morning we had the hotel’s fantastic buffet breakfast again with a beautiful view and headed a few miles away to Princeville Ranch to go zip lining.

After getting our harness and helmets on, we rode across the street and out into the ranch a bit and then hiked a few minutes to our first zip line. We zipped along nine different zip lines, finishing with a race against each other on “King Kong,” a line that was 1,200 feet long. 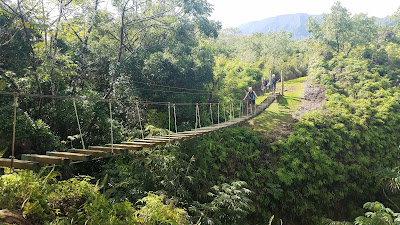 The island is so hilly and amazingly green! Our guide studied something like Hawaiian studies in school and was full of knowledge about the island and culture. He showed us a plant called hila hila that closes up when you touch it.. so cool! 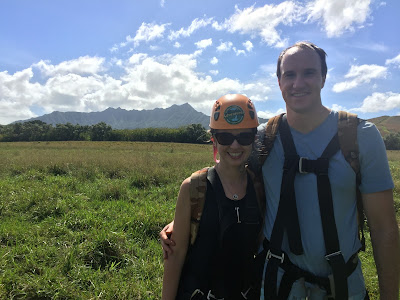 After ziplining, we headed back to the hotel and decided to order tea, one of the St. Regis signature butler services. It came with four orchid blooms on the tray… so pretty!

While having our tea, I looked through a list of activities the hotel hosts each day and saw that they had hula lessons going on down by the beach, so once we finished our tea, we headed down to check it out. The teacher finished up a lesson with a lady and child right as we walked up, so she helped them get started making leis, and then began our lesson. We learned that hula dances tell stories, and we learned a dance to a song called Beautiful Kauai, which she had us dance to barefoot. After our lesson, we walked to a cabana a few feet away and she taught us how to make leis using leaves and orchid blossoms. We used our toes to make the loop at the end of the lei! Funny. The leaves got sticky after they were twisted around.

Once we finished with that, we dropped the leis off at our room and then walked about a mile down the street to the parking lot for Queen’s Bath, and started the hike down to the water. I had discovered Queen’s Bath on Pinterest before we arrived in Kauai, and in the morning had looked into it again. After reading several five-star reviews that commented on how dangerous the area was, I wasn’t sure if I still thought we should go! Even as we began the hike down the muddy, sometimes steep, narrow trail, I was questioning if we should turn back. It was very tricky to not get our tennis shoes totally muddy. Along the way, we saw some really interesting looking trees called walking palms.

Once we made it to where we could see the ocean, I knew we’d made the right choice to stick with it.. it looked gorgeous. When we got to the bottom of the trail, we were a little bit above the water, on volcanic rock. I told Martin it might be the most beautiful (and powerful, and slightly scary) thing I’ve ever seen.

After taking multiple videos of the water, we continued north along the volcanic rock, and finally came to the bath. It was deep enough that people could jump in from ten or so feet above the water, and it was nice and clear. Martin went for a swim. Yeesh! I got nervous watching him in the water when a big wave came and crashed over the rocks and filled the pool. It really was beautiful though.

When he was done swimming, we continued north along the rocks, hoping we might be able to find our way back to the hotel without having to go up the muddy path. But eventually we got to a spot that was too dangerous to continue, so we turned back.

We got to back up to the top of the trail just as the sun was setting, and were able to watch the sunset from a golf course between the hotel and Queen’s Bath.

For dinner we decided to give Hanalei Gourmet a second try. Our zip lining guides said we needed to go back and try the fish tacos, so we did. They were great!