The next morning, Hajar and I got up so we could walk out to the dunes and take pictures of the sunrise.  Now, I’m typically NOT a sunrise person, I prefer sunsets.  A. I’m not a morning person, B. there’s the risk that you drag yourself out of bed, get all awake and then it’s a boring sky, or overcast or something.. so I typically go with sunsets.  But when it’s what I’ve got, heck yeah I’ll get up and do it!  So we waited.  It got lighter.  There weren’t any colors.  There wasn’t a sun.  We were very, very confused.  Eventually we realized that what we had thought was the moon… was actually the sun.  What the heck?

After breakfast, we got back into the car with Hassan and Hassan to start our day’s journey to Ouarzazate. A few minutes down the road, tour guide Hassan told us that children in the area like to catch desert foxes to play with and show to tourists.  Learning my lesson after the monkeys, I believed him this time.  Sure enough, a few minutes later we pulled over on the side of the road to see a group of children and a fox.  They handed it to me through the window and Hajar took a few pictures.  After handing it to Hajar and taking a couple more pictures, it started freaking out and scratched her.  We gave it back to the kids and got out of the car to take the rest of the pictures.  Once we paid the kids and got back in the car to leave, Hajar told me that Hassan had asked if she was bleeding, and said if she was we would have to go to the hospital!  Thankfully she wasn’t.

This is a good time (since I’m still alive and healthy) to take a minute to laugh at something.  Before leaving for Morocco, I went to the doctor to get any needed immunizations.  The nurse asked if I would be interacting with any animals.  I said no, so she said “ok great, just avoid any you see then.”  But here we are, I’ve petted Hajar’s dog, ridden a camel, and held a wild desert fox just a few days in… Whoops.

A little farther down the road, we stopped to hear a concert by Groupe des Bambaras in the village of Khamlia.  We walked into a big room and were poured some.. you guessed it… Moroccan mint tea, and the concert began:

So cool.  I couldn’t believe this performance was going on just for Hajar and me!  They invited us to dance with them for a bit of it. 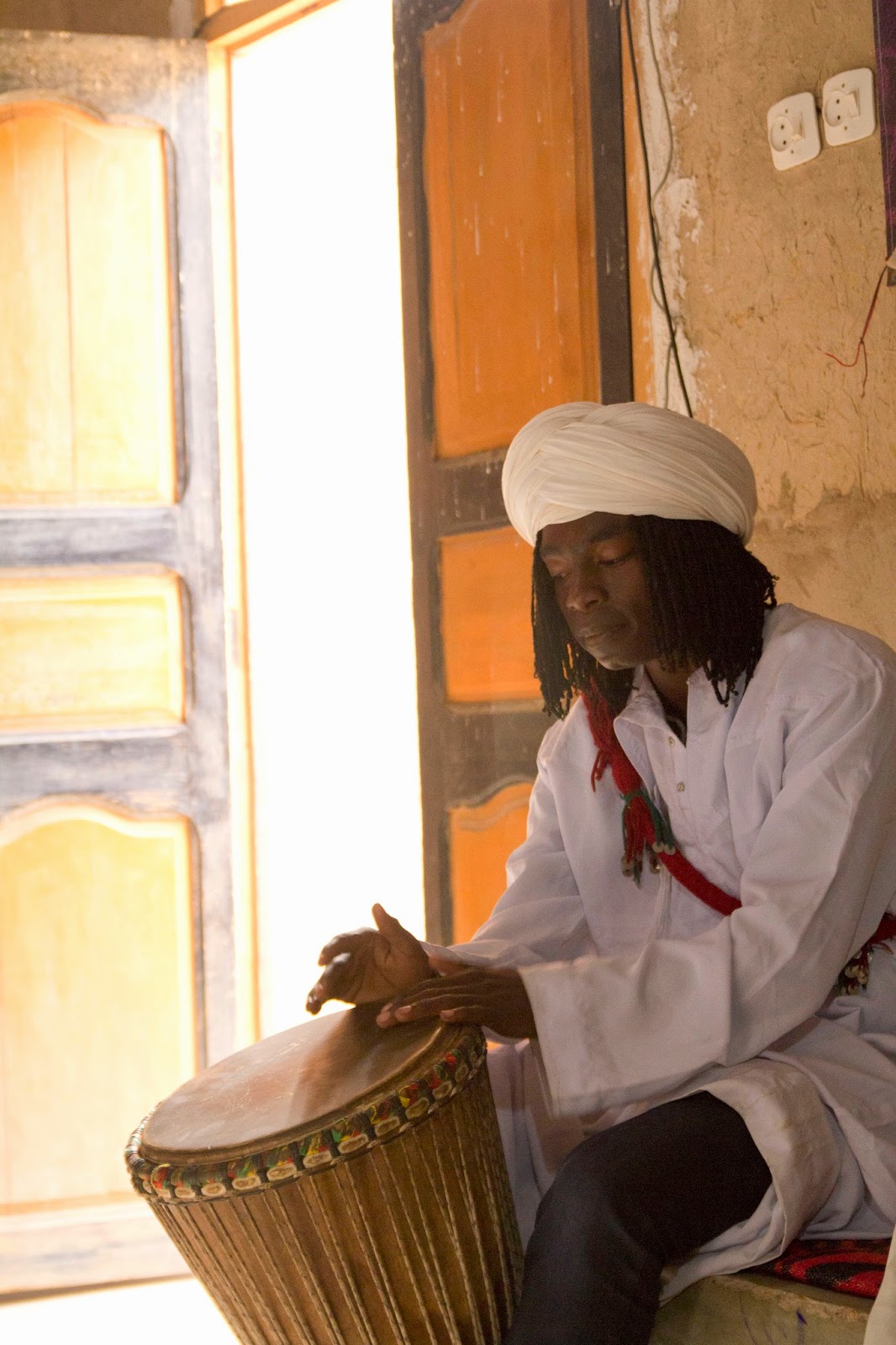 After 10-15 awesome minutes of listening to the performance, the (obnoxious) American father/daughter duo from the night before came in.  Even though the music was loud, we could hear them over it.  A few minutes later, Hajar and I purchased a few of the group’s CDs and got back in the car.

A little later, we dropped driver Hassan off; he had come with us to get a ride to a town outside of Merzouga to visit family.  Our next stop was at a little fossil museum/store.  We looked around for about ten minutes and I bought a long green stone necklace for my mom there.  After that, we stopped at Musee des Sources de Lalla Mimouna where we were taken on a tour by the curator, Mr. Zaid.  Ziad had built the museum around an abandoned natural spring and focused the museum on Berber agriculture and culture, displaying tools, clothing and jewelry of the group.

We spent around an hour at the museum, then got back on the road.  We grabbed a quick lunch with Hassan in a little restaurant along the way, having Moroccan mint tea, a tajine and some other great food.

As usual, we stopped a couple of times to take pictures.  Gorgeous!  On one of the stops, we saw another group of children selling camels made from palm leaves.  This time, one of the children came up while I was taking pictures and put the camel he had made in my hand.  I tried to tell him I didn’t want it, so did Hajar, but he insisted it was a “gift.”  Clever kid.. guilt trip!  We kept telling him no, but he refused to take it back.  He never would take it back, so we got in the car with it and left. 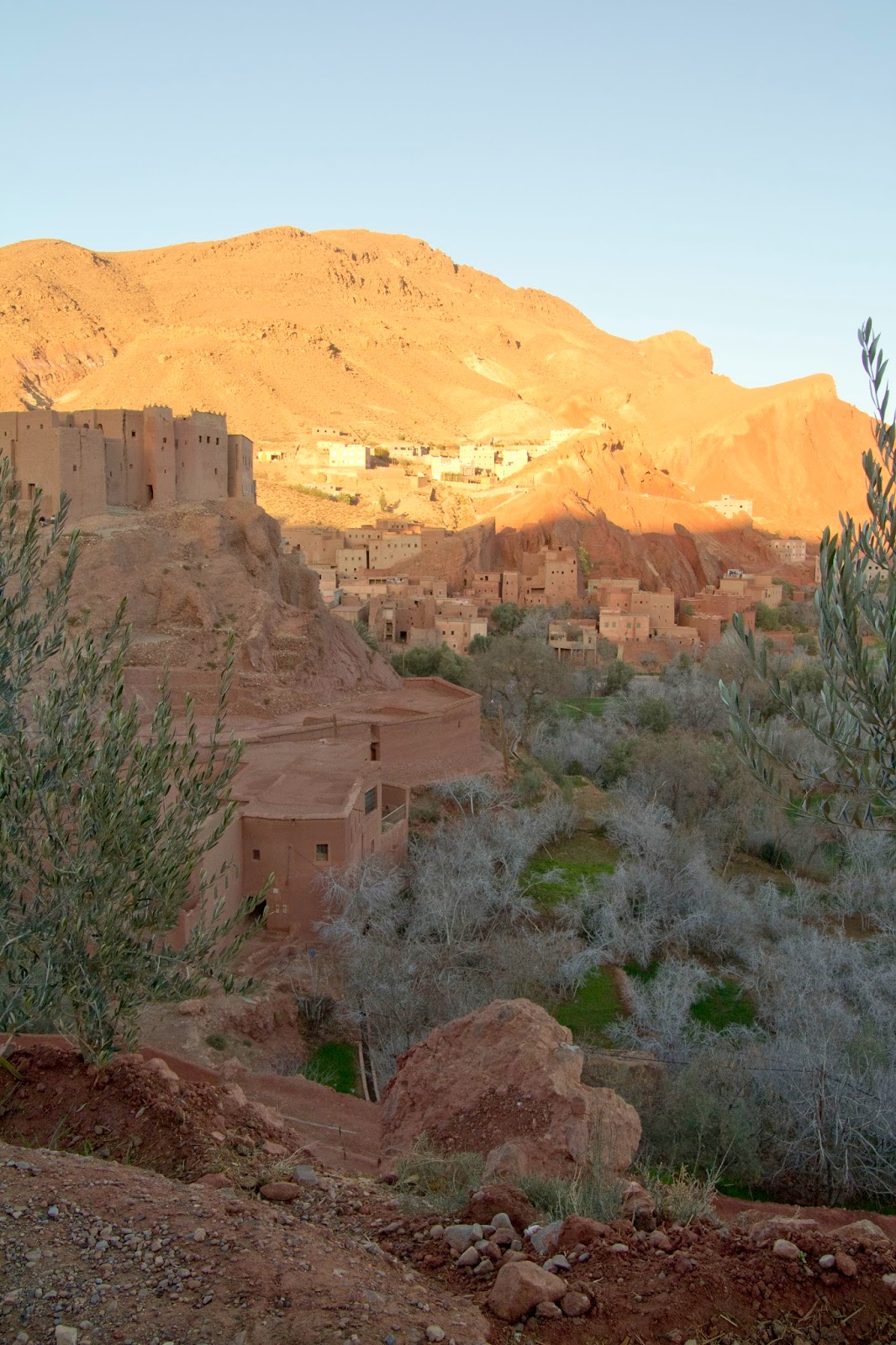 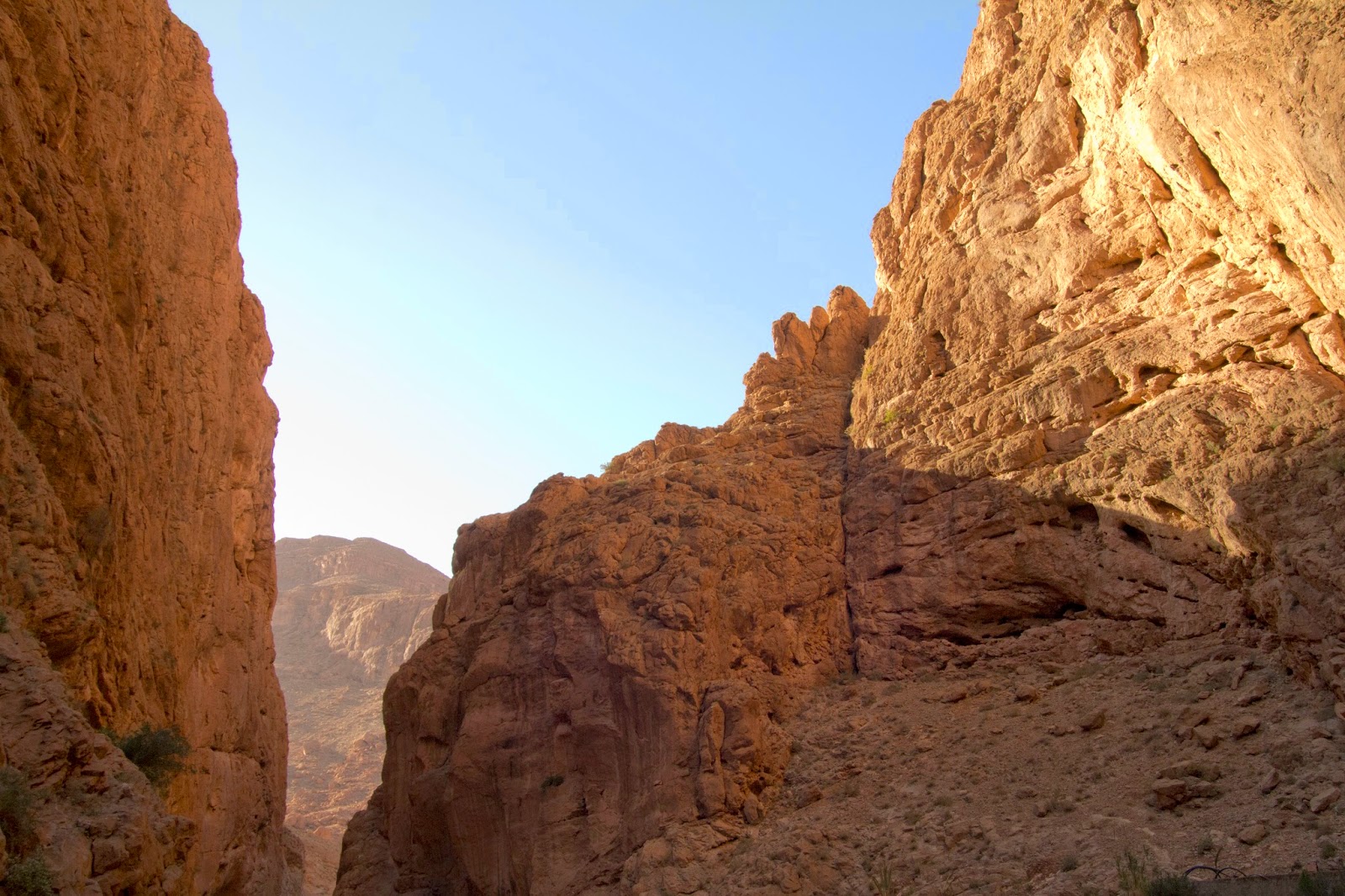 On our way to the gorges, we drove through a village to take pictures with what Hassan called monkey fingers in the Dades Gorge.  I tried to take pictures of the surroundings and people as we drove by, and Hassan told us that sometimes the people throw rocks at cars if they see a camera!  He seemed to think it was funny so would just drive by them quickly and let us take pictures.

From there, we went to the Todgha Gorge and Hassan let us out so we could walk through it.

By the time it was dark, we reached the Valley of Roses, and then finally our destination, the gateway to the desert: Ouarzazate.  Wonder what that town name sounds like?  Basically: “Where’s this at.”  Our destination for the night was Kasbah Riad Bouchedor and as usual, we had a wonderful and filling dinner.

The itinerary for today in an email from Hassan:

Day 2: Merzouga-Rissani-Todra Gorges-Dades Gorges.  Wake up for sunrise lovely pictures, and breakfast in open air.  We return by camels to the hotel for shower.  Then, we depart to Erfoud which is known by fossils’ preparation.  Drive through palm trees groves.  We stop for lunch, then we take a short walk in Todra Gorges.  We head our stopping point Boumalne de Dades.  Dinner and overnight in the hotel.