(Note: I love getting comments back!  Feel free to comment/email!)

On Friday I had my second day of class.  It went ok.  Pretty sure now that my professor doesn’t speak English.  She had me help a new student because he was from the United States and she asked me (in French) to help him, “preferably in English”–hah!  No problem there.
Later that day I ended up walking and climbing stairs until my feet were ready to fall off!  I went back to St.-Séverin and the Panthéon in the Latin Quarter to take pictures.  I was able to get pictures of the basilica, but not the Panthéon because tripods weren’t allowed.  After that I went in the Musée de Cluny.  It had some really neat medieval pieces.  I went back to the Luxembourg Palace to see if I could go inside but never found an entrance or sign indicating that it could, and I had left my tour book at home on accident (now seeing that my book says there are tours).
After all of that, I decided I’d get some use out of the tripod I was carrying by going to Notre Dame to go up to the top of one of the towers.  On my way, I happened across St.-Sulpice, yet another huge, amazing old cathedral and walked around the inside.  When I got to Notre Dame, they had just closed the line to go up to the top, so I decided to take the metro to the Montmarte area to Sacré-Coeur to take pictures instead.
Sacré-Coeur is on the top of a hill overlooking Paris.  I had already read this, but I didn’t get how true it was until I walked up the monster hill to follow up by walking up a monster staircase and then walked up 300 steps to get to the top of the basilica!  Gracious.  It was very pretty inside and had an awesome view of the city from the top of the building.  After all the walking just to get to the bottom level of the building, I was relieved that they were still selling tickets to go to the top!  I spent an hour or more taking pictures in the top.  Just wish the sky had been a little more interesting, but it really was a fantastic view.

Once I climbed back down the steps and down the hill, I started looking for the Moulin Rouge.  I remembered from my tour book that it was in the same area, and I wanted to snap a picture of the outside.  After that I was out of ideas for places to go to in the Montmarte area since I had forgotten my book.
I was thinking about going home for dinner then going back to the Eiffel Tower or Arc de Triomphe to take pictures, but decided I’d just take the train straight to the Champs-Élysées area/avenue.  After walking up and down the avenue (with my feet KILLING me by this point), I felt like it was a good time to go up to the top of the Arc de Triomphe to take pictures (I’d been dying to get night pictures from these places with views since I got here and finally had clouds in the sky and an unlimited metro pass).  It was another fantastic view of the city, with a MUCH closer view of the Eiffel Tower than Sacré-Coeur.  I definitely plan to go again when there’s a better sky!  Thankfully it’s open late. 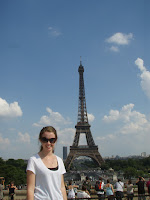 The trick is that everything here costs money (everything in DC was free.. I’m spoiled!) and closes at a different time.  The Notre Dame tower closes at 5 pm, Sacré-Coeur dome at 8 pm, Arc de Triomphe kicks you out at 11 pm and I’m not sure about the Eiffel Tower yet, it looks like its times are seasonal and vary by floor.

Today I slept in to give my feet a nice rest, and then I went exploring.  I spent most of my day being somewhat lost I guess.  I was looking for a store when I first went out, and it took me over two hours to find it.  I’m officially over these crazy streets.  I thought I was OK with navigating until I came here! 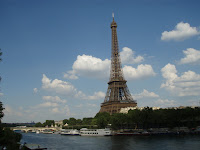 The store I was looking for was in the 16th Arrondisement, which also happened to be a section of my tour book.  I saw the Palais de Chaillot, which I found out is the building that sits kind of overlooking the Eiffel Tower.  I didn’t go inside of it, but had fun looking around outside.  After that I walked along the Seine for a while.